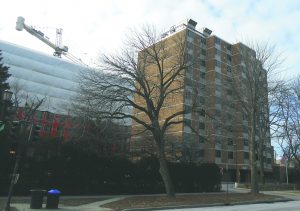 There is some room south of Perlman Apartments (left) where Housing Authority of Cook County can potentially building a mixed-income development. (Photo by Igor Studenkov/for Chronicle Media)

The Housing Authority of Cook County is in the talks with the City of Evanston about a potential mixed-income senior housing development near the city’s downtown.

The city has historically been more economically diverse than suburbs farther north, with a mix of working-class, middle-class and well-off neighborhoods. But for the past 20 years, there have been growing concerns about rising rents making Evanston less affordable. And, as with many other suburbs, there have been concerns about seniors on fixed income being able to stay in their homes.

The housing authority is currently trying to secure the necessary funding, but it currently hopes to get all of its ducks in the row by next year.

Since the late 1990s, downtown Evanston has seen significant development, with newer, taller buildings increasingly dominate landscape. The areas near the lakefront and along major thoroughfares such as Central Street and Main Street have seen some development as well. New housing has been built along the traditionally industrial fares against the now-dismantled Mayfair branch line railroad corridor, and there have been efforts to attract retail to traditionally working-class parts of the city.

But, as with many other parts of Chicago area, the growing development has also seen rising rents. According to estimates by Apartment List rental listings and resource site, the average rent in Evanston went up by 2.2 percent in the last year alone. The Daily Northwestern reported that, between 2004-13, the city lost 40 percent of its affordable housing stock.

The Evanston City Council has been trying to address the problem. In October 2018, it tweaked the law regarding how many affordable apartment or condominiums developers will need to include. Most notably, it required that 10 percent of all the units be affordable. The developer can lower that requirement to 5 percent by paying an in-lieu fee, but whereas before, the fee was $100,000 per unit, the ordinance increase the fee to $175,000 in the downtown area and $150,000 per unit in the rest of Evanston. And while before, the fee could be changed at the city council’s discretion, the new ordinance tied it to the Consumer Price Index. Finally, while before, the developer could get out of the on-site requirement by building the affordable units elsewhere in Evanston, the city now requires them to be built “in the same neighborhood or a comparably zoned neighborhood.” 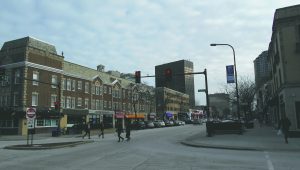 A view of downtown Evanston from the north. (Photo by Igor Studenkov/for Chronicle Media)

Through it all, HACC has been doing its part to provide affordable housing options. Currently there is more public housing in Evanston than in most other suburbs north of Chicago. It currently has two senior public housing developments in Evanston. Jane Perlman Apartments is located at 1900 Sherman Avenue, about a block north of downtown. Victor Walchirck Apartments are located further northwest at 2300 Noyes Court, near the Noyes Purple “L” line station. According to HACC fact sheet, they have a total of 199 units.

The housing authority also operates scattered site housing units to serve low-income families. HACC spokesperson Nick Mathiowdis that there are 42 units in total — some two bedrooms, some four bedrooms — that are spread out all across Evanston. As in other Chicago suburbs, the housing authority manages the Housing Choice “Section 8” vouchers on the local level. Finally, it works with the Evanston/North Shore YWCA to provide affordable housing for women and children, with victims of domestic violence getting special priority.

In an interview last month, HACC Executive Director Richard Monocchio explained that, while Evanston is happy with the high-end development taking place throughout the city, they want to make sure longtime residents don’t get displaced in the process.

“The city is interested in building housing to serve middle-income people and people who would otherwise be priced out of the city,” he said. 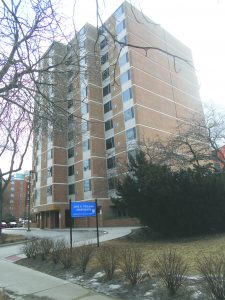 The Housing Authority of Cook County is looking to build a mixed-income senior housing development near Jane R. Perlman Apartments (pictured), which are located one block north of downtown Evanston. (Photo by Igor Studenkov/for Chronicle Media)

Monocchio specified that, for the purpose of this project, the term “seniors” mean people age 55 and older.

Housing authorities throughout United States, including the Chicago Housing Authority, have increasingly been shifting toward mixed-income model when it came to family housing, while senior housing tended to be geared toward low-income seniors.

Mathiowdis said that his employer is still negotiating with the City of Evanston on the details, including how the project will be financed. He explained that they currently hope to build on “part of [their] property” near Perlman Apartments.

The only parcel that would fit the bill is the land directly south of the building, which is currently mostly used for parking. It is about a block north of downtown, putting residents within walking distance of not only its many shops and restaurants, but Evanston Public Library’s main branch and Davis Metra and “L” station, which also serves as a stop for most of the buses serving Evanston and suburbs north and west of it.

In his responses, Mathiowdis repeatedly emphasized that many aspects of the plan are still being worked out. The key issue, he said, is obtaining financing, which is still a work in progress.

Monocchio said that he didn’t expect those issues to be settled until next year.