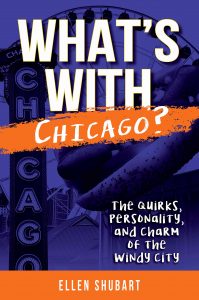 The history and explanations of local facts are included in a new book, “What’s With Chicago? The Quirks, Personality, and Charm of the Windy City,” written by veteran journalist, author, urban planning advocate, tour guide and all-around Chicagophile, Ellen Shubart.

If you travel on a street that goes all four directions, if your neighbor uses creative ways to secure a parking space in winter, and if you explain to others that the nickname “The Windy City” has nothing to do with weather, then you can be in only one American city: Chicago.

The history and explanations of these and other local facts are included in a new book, “What’s With Chicago? The Quirks, Personality, and Charm of the Windy City,” written by veteran journalist, author, urban planning advocate, tour guide and all-around Chicagophile, Ellen Shubart.

The book is one of St. Louis-based Reedy Press’s newest projects, which has titles encompassing everything from narrative histories to cookbooks to children’s picture books. When Reedy approached her about writing the book, she quickly said yes.

“I did it because I love the city,” she said. “I give many tours of the city for the Chicago Architecture Foundation, and it is a topic that is close to my heart.”

“What’s With Chicago” is not Shubart’s first foray into book publishing. She is the co-author of two books for Arcadia Publishing’s Images of America series: “Glencoe, Illinois” and “Taylor Street: Chicago’s Little Italy.”

Her latest book has 85 topics divided into 14 sections explaining what makes Chicago unique.

“The first 50 — of the 85 individual topics — came easily,” Shubart said. “I listen to what tourists ask about or talk about the city. I have a feel for what others think the city is, and I added those ideas to my own. I had to dig a bit more for the rest of the topics — mostly it was combining to include everything I wanted to say and to find those things that Chicago takes for granted but are truly Chicago.”

Like calling dibs on a parking space in winter.

“The St. Louis publisher was astonished by that, but I thought that’s how we all do it,” she said.

The book has 43 Fact Boxes to complement the 85 topics. For example, the section, “Windy City Revisited,” states that The Windy City, Chicago’s oft-used nickname, doesn’t refer to the city’s wind. Among large cities, the Fact Box explains, Chicago ranks 12th for average wind speed. America’s windiest city is Boston, where the wind blows, on average, two miles per hour faster than in Chicago.

Shubart knows a lot about Chicago, but she learned some new facts while researching the book.

“I did learn new things — you have to when you do research on an historical topic,” she said. “I learned about the superintendent of the Water Tower wrapping the building up in wet sheets to protect it from the Great Chicago Fire of 1871. I had always wondered why that tower survived. It later became the ‘spirit’ of Chicago, representing the ‘I Will’ motto of the city.

“I also learned who the guy was for whom the Edens Expressway is named. I had not known about Mr. Edens, a banker who was instrumental in getting state law passed to allow for bonding to pay for infrastructure like a highway.”

Drawing on her background as an urban planning advocate, she remarked, “Imagine what the city would look like if he hadn’t been around!”

Shubart started her career as a journalist for a local newspaper chain, Pioneer Press, in the 1970s-’80s, reporting on Glencoe village government.

“From that experience I learned about the history of the towns along the North Shore, with the past always shaping the present. I also learned about local politics, something that affects every town or city, and, of course, Chicago is no exception. I then worked as an editor for a Crain Communications’ publication, City and State, where I learned a great about how cities do business, which, of course, helped me analyze the city for the book.”

Just before retirement and her current 12-year gig as a volunteer docent for the Chicago Architecture Foundation, Shubart worked for an advocacy planning organization, the Metropolitan Planning Council. The experience widened her knowledge of and perspective about the area.

“That job focused on sustainable development and took me around the region — to points in Cook and the six surrounding counties — that enabled me to learn more about the area’s history and the relationship between Chicago and its surrounding suburbs. It’s a synergistic relationship; each of them couldn’t exist without the other, and that is part of Chicago’s story as well.”

Commenting again about “What’s With Chicago,” she said, “I think the most important fact that I knew intuitively — and most Chicagoans do, too — is that we are here because of the Chicago River and Lake Michigan. As the real estate agents say, ‘location, location, location’ is everything, and it is. Without the economic boom from the freight shipping on the river, without the lakefront, Chicago would be a stick-in-the-mud town on the prairie. The location made Chicago the country’s crossroads, pushed us into the forefront of manufacturing (like steel, which wouldn’t have been made without the lake’s water) and transportation.”

Shubart will talk about her book at 7 p.m. Aug. 9 at The Book Cellar, 4736 N. Lincoln Ave., in Lincoln Square. She will lead a trivia quiz and award prizes to those who best answer questions about Chicago’s nicknames through the ages, the role of the Chicago River, or Chicago’s sports-crazy calendar with year-round activities ranging from basketball to “Chicago’s game:” 16-inch softball. Admission is free, and reservations are not necessary.