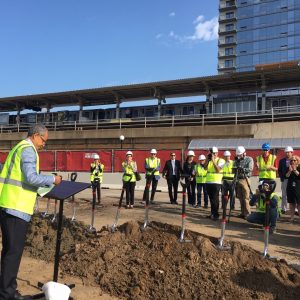 For the third time in two years, officials in west suburban Oak Park on Thursday celebrated a groundbreaking for a major residential/retail development it anticipates will generate much- needed tax revenue.

The 12-story building, which is expected to be completed by early 2019, is a project of Dallas-based Lincoln Property Company. It will have 263 residential units, 10,000 square feet of retail space and parking for about 400 vehicles. The building will rise on the site of two former village-owned parking lots along South Boulevard east of Harlem Avenue.

The groundbreaking comes more than 11 years after village officials first sought a developer for the block-long site. An initial proposal in 2006 for an 8-story building, with 96 condos and 12,600 square feet of retail, fell through in 2008 after the global economy slide into a deep recession.

Two other major developments that broke ground in 2015 after years-long delays were completed recently and are marketing their condo units and have attracted retail renters.

Oak Park, which under previous village boards pursued “transit oriented” development, will get new residential units across the street from a Metro and CTA rapid transit station and a block from the downtown shopping district. But it is a larger tax base from increased sales and real estate tax revenue that Oak Park businessman and village president Anan Abu-Taleb and others covet most.

The three new building complexes started the past two years will add 804 new residential units to the tax rolls and could bring as many as a thousand new residents to Oak Park.

Abu-Taleb, a local restauranteur who was first elected village president four years ago on a business- and development-friendly platform, noted that the South Boulevard property had been underutilized for 15 years since the village purchased it for $3 million.

“More than 15 years off the tax rolls,” Abu-Taleb noted. “It’s hard to think of the opportunities we’ve lost over the 15 years.”

He added that the initial proposal fell through “because we weren’t business friendly,” though he didn’t mention the 2007 housing market crash. 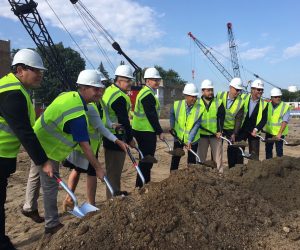 Abu-Taleb pointed to the Oak Park Station development just to the north across the CTA tracks, saying, “Less than two years ago, in November 2015, we gathered in a vacant lot (on the other side of the tracks) for a groundbreaking ceremony. It was a great thing to see.”

Officials are looking forward to the increased real-estate and sales-tax revenue; the South Boulevard building alone projected to bring in $900,000 in revenue annually.

The Oak Park Station complex to the immediate north on Lake Street boasts a 22,000-square-foot Target store on the first floor. And construction on the new 20-story Vantage residential tower a block east and north at Lake Street and Forest Avenue recently saw the opening of a 10,000-square-foot Cooper’s Hawk wine restaurant on its first floor.

The $60 million price tag for the South Boulevard project makes a total of more than $230 million for the three developments. That investment has not come without a cost to Oak Park, which has donated publicly owned property for all three developments, in addition to cash.

The village sold the South Boulevard and Harlem lots to Lincoln Properties for $1.1 million, despite spending $3 million to acquire the real estate some 15 years ago.

Oak Park also contributed some $7 million of public money toward the Oak Park Station project on Lake Street, including the land, the public part of a parking garage and a new north-south street that connects Lake Street and North Boulevard. In addition the village had to use $3 million from its downtown tax increment financing district to pay for environmental remediation of underground tanks and contaminated soil at the site.

And the $90 million Vanguard project was inked after Oak Park agreed to include approximately $9 million from the village, including the land under a former garage, for costs related to 300 public parking spaces in a new 588 space parking garage.

The South Boulevard project will likely not be the last development in the downtown Oak Park area. A very controversial proposed 18-story mixed-use building planned for directly across the street from the Vanguard property is currently wending its way through the village planning process. It has faced stiff citizen opposition due mostly to concerns over its environmental impact on a beloved century-old park immediately to the north.

In concluding his comments Thursday, Abu-Taleb made it clear he intends to work to attract developers to other potential projects in the village, saying, “Oak Park is open for business.”