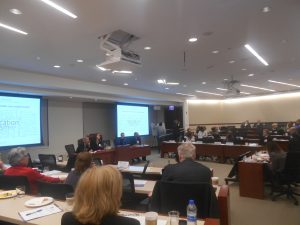 Amidst the growing concerns about the future of middle-class neighborhoods in Chicago, the Greater Chatham Initiative is working directly with local developers to reverse the trends.

Launched in 2016, the Greater Chatham Initiative is working to bring economic development to four community areas on the South Side of Chicago. What it defined as the “Greater Chatham” area includes the eponymous neighborhood and three nearby communities — Auburn-Gresham, Greater Grand Crossing and Avalon Park. Chatham in particular has historically been a middle-class neighborhood and home to one of South Side’s most vibrant commercial districts, though that has changed since the early 2000s.

As part of its redevelopment efforts, the Greater Chatham Initiative has been working with developers to help them sell homes to millennials. They are also advertising the communities’ assets to potential homebuyers and investing in public art and local businesses. While it may be too early to assess long-term effects, early signs suggest that their efforts are already starting to pay off.

On Nov. 15, GCI, the Federal Reserve Bank of Chicago and the Metropolitan Planning Council held the Preserving Chicago’s Middle Neighborhoods conference. According to the statement released by the Federal Reserve Bank, the idea was to “address challenges affecting middle class communities of color, and offer up actionable ideas to support these communities, particularly those on the south and west sides of Chicago.”

According to the report prepared by the Federal Reserve Bank, since the 2008 financial crisis, more black homebuyers are buying homes in the suburbs than in the city. South Side neighborhoods – including the ones in the Greater Chatham area – saw larger decline in prices following the crisis than other parts of the city. And while Auburn-Gresham, Chatham, Greater Grand Crossing and Englewood saw bigger price recoveries than other majority-black South Side neighborhoods, the recovery still lagged behind Chicago as a whole.

As noted during the conference, an issue facing historically middle-class minority neighborhoods such as Chatham is that the younger generations are less likely to want to live in the neighborhood and less likely to inherit the houses. The older residents were more likely to leave the city, either for the suburbs or for southern states they originally came from. The fact that middle-class jobs in fields that many of the black residents worked in — such as teachers and city workers — has been declining across the board hasn’t helped matters.

During the conference, GCI Executive Director Nedra Sims Fears, said that, as part of the broader plan to revitalize the Greater Chatham area, the initiative set out to attract more homebuyers. It works with Federal Reserve Bank to find investors who would be willing to buy older homes, renovate them in ways to make them more attractive to millennial homebuyers and sell them and sell them at profit.

“We partner with an organization called the South Side Community Investors, which is classically a trade group of real estate developers in our neighborhood,” Sims Fears explained in the follow-up interview. “And we have an annual forum — the State of Greater Chatham [forum].”

During the forum, she explained, they give information on income and housing market trends in the area. And, since the market can vary a great deal even within a single neighborhood, they provide “micromarket’ level data.

To help attract homebuyers, GCI puts together a map highlighting neighborhood amenities such as local businesses and schools.

“People assume we don’t have good neighborhood schools [on the South Side], and we do,” Sims Fears said. “And we put out map so, when people come to the area, they want to see that this is a full service neighborhood where they can find doctors, childcare.”

And the initiative “practic[es] tactical urbanism” by investing in public art and public events.

“Chatham block clubs — when they decide to organize on those issues, they shut stuff down if it’s not aligned to their priorities, if the information gets into their hands,” she said

Furthermore, the report explains, the real estate prices seem to be going up. However, the increases weren’t the same across the board. Greater Grand Crossing has seen the highest increases, followed by Auburn-Gresham, while Chatham has seen declines in both the number of sales and the housing prices.

Sims Fears said that, while her organization was surprised by the “uptick in interest level” in Greater Grand Crossing, it made sense — it was the closest neighborhood to Woodlawn, which is slated to become home to the Obama Presidential Library. As previously reported by the Chronicle, this is already causing Woodlawn real estate prices to go up. Sims Fears said that Greater Grand Crossing has more two- to four-unit apartment buildings than other parts of Greater Chatham area — and GCI has noticed a trend of Millennials buying up these types of buildings so that they have a place to live and a way to earn extra income from renting out the remaining units.

She also argued that Chatham’s lower housing prices are actually working in its favor. With rents going up all across the city, Sims Fears said, buying a housing in the neighborhood is becoming cheaper than renting.

It should be noted that, according to the data compiled by the Neighborhood Housing Services of Chicago, a nonprofit that works to help homebuyers get homes at affordable prices, between January 2018 and June 2019, most residents who bought homes in Greater Chatham area actually come from the area itself, as well as the neighboring Englewood and South Shore neighborhoods. But it’s also attracting homebuyers from South Side black and mixed-race neighborhoods nearby, as well as majority-black West Side neighborhoods, Logan Square and even the Loop.

Sims Fears said that GCI has two major projects in the work. One is the “Artist on the Nine” art incubator — which will provide gallery space and artist studios, as well as offer community events. It is slated to open “in the third quarter of 2020” near the intersection of two major Chatham commercial corridors — 79th Street and Cottage Grove Avenue.

“10 percent of the people in Greater Chatham identify themselves as artists, but it’s hard for them find space to work out of,” Sims Fears said.

“In 2020, thanks to a grant from the Chicago Community Trust, we’re going to be working with 18 restaurants along 75th and 79th streets and help them offer the best dining and takeout experience they can have,” Sims Fears said.

Another part of that strategy is to open a Chicago offshoot of Foodlab Detroit, a good business collaborative. As explained on its website, it’s a group of caterers, bakers, picklers, distributors, corner stores and cafes that pull together their resources to not only support each other, but to help build “a more delicious, healthy, fair, and green food economy” in their communities.

“They’ve been very successful in Detroit, and we’re excited to bring that program to Chicago,” Sims Fears said.