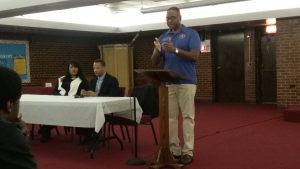 Trying to revitalize struggling Chicago neighborhoods, Cook County Commissioner Richard Boykin is proposing that first responders and teachers be given free homes in those neighborhoods.

The 1st District commissioner said too many neighborhoods “have been devastated due to poverty, due to high gun violence, due to unemployment.”

He wants to take some of the 80,000 abandoned homes and vacant lots in the city of Chicago and give the homes and properties to first responders (police officers, firefighters and paramedics) and teachers, getting them to live in the communities where they work. Boykin said the Endangered Communities Tour he did last year — where he went into the Chicago communities most affected by gun violence and held town hall meetings — generated the idea for his Neighborhood Revitalization Act.

He knows that some people may not agree with giving free homes to police officers and other public service employees, but noted that some incentive is needed to get those individuals to live in troubled areas.

Boykin took his proposal Saturday to Antioch Baptist Church, located in Chicago’s Englewood neighborhood, which is in the county’s 2nd District.

Englewood is one of six communities proposed for the program. The other five areas are Austin, West and East Garfield Park, Back of the Yards and Auburn Gresham. Boykin said the number of communities will likely grow as he works with other commissioners to get the votes to approve the program.

The program would be paid for through the Cook County assessor offering an incentive to industrial and commercial property owners that would lower their assessment, meaning they would pay less in taxes. In exchange, the property owners would be required to contribute back to the county a percentage of their savings.

Many people at Saturday’s town hall had questions and some, like Gloria Williams of the Englewood Quality of Life Task Force, flat out rejected it.

“You put that in place and it’s illegal,” Williams said. “It is forced immigration.”

She said the money would be better spent on improving the neighborhoods for those people who want to live there.

Williams said that the plan does not go far enough and should include other individuals, such as employees of the Chicago Public Library, the Chicago Park District and the Chicago Housing Authority. She said veterans should also be eligible for the program.

Boykin said he is willing to sit down with Williams and other people who want to expand or fine-tune the legislation.

“This is an attempt to work for you,” Boykin said. “I am willing to work with you to make this stronger and better.”

He has introduced the legislation, which will be talked about at the Cook County committee level before going before the full County Board. Boykin anticipated the issue could be voted on by the County Board in April.

Alexandra Willis, who has lived in Englewood her whole life, said the money would be better spent working to improve the embattled communities, helping the people who choose to live there.

“Paramedics do not need a free house,” Willis said.

She said there are a lot of loopholes in Boykin’s proposal that need to be addressed. Willis said there is no end date for the program and no matrix for determining the program’s success.

Willis also said that Boykin’s proposal that 30 percent of the construction labor jobs go to at-risk youth in that effected community sells the black community short.

“Why not put a requirement in for black architects?” Willis asked.

Boykin said he saw the construction- job stipulation as a way to help young blacks, noting that schools have failed young African-Americans. He pointed to Marshall and Westinghouse high schools in the 1st District, which both only have 1 percent of graduates ready for advanced education.

“Not all kids go to college. Not all kids go into the military,” Boykin said. “Too many of those other kids are slinging drugs on the corner, drugs that are coming from Mexico.”

Kevin Bailey, 20th Ward Democratic committeeman, said getting first responders and teachers as residents is one step in turning things around in the troubled neighborhoods.

“There is a body of problems. There is not one policy that is going to wipe away everything,” Bailey said. “We need to take a piece, execute it effectively and move on to the next piece.”

Boykin said his proposal is a step forward after “decades of government failure.”

He said the free housing proposal has never been done previously. The nearest thing to it, he said, is the U.S. Department of Housing and Urban Development’s Good Neighbor Next Door program that helps first responders and teachers with down payments for homes.

Boykin said if his program can improve relations between police and community members in the city it would be worth it.

“There is deep distrust of police in communities,” Boykin said. “This would help deal with that divide.”

— Plan would give free homes to Chicago teachers, first responders —