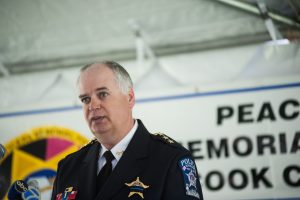 Riverside Police Chief Tom Weitzel has ripped Cook County State’s Attorney Kim Foxx for comments she made last week in the aftermath of the Las Vegas shootings when she said that Chicago’s ongoing gun violence requires an examination of the distrust between communities and law enforcement. (Photo courtesy of Tom Weitzel)

Cook County State’s Attorney Kim Foxx may need a reminder that she is a prosecutor and not a defense attorney, according to Riverside’s police chief Tom Weitzel.

Weitzel, chief of the near west suburban town’s police department, blasted the state’s attorney after her recent comments at the Union League of Chicago. During her address, Foxx said that Chicago’s gun violence requires smarter gun laws and an examination of the distrust between communities and law enforcement. Her comments were made last week after the Las Vegas massacre.

“Her comments had a political motive,” Weitzel said. “They were not factual.”

He said every community does not have problems with police and to cast all police with such a broad brush stroke is unwarranted.

“Don’t make our people in law enforcement the sole reason for all of society’s ills,” Weitzel said in a Chronicle interview. “It’s not fair.”

He said the state’s attorney’s comments were ill-timed and not germane to the job that police did in helping people during and after the Las Vegas shootings.

“Two days after the mass shootings you are going to use this for your political agenda?” Weitzel asked, rhetorically.

He said video after video taken right after the shootings showed citizens and police, both on- and off-duty officers, working hand in hand to attend to people who were shot, moving them out of harm’s way.

“It was one of the finest moments for law enforcement,” Weitzel said, putting the police work done during and after the Las Vegas shootings on the same tier as the work done in the wake of the Sept. 11, 20001 terrorist attacks.

He said it is a time to support law enforcement, not tear it down.

“We should be bolstering law enforcement, not badmouthing them just because you are in the spotlight,” the police chief said.

Weitzel said there are bad police officers, just like there are bad apples in any profession, and that those who abuse their powers as law enforcement officials should be dealt with accordingly.

“If there are bad cops, prosecute them to the fullest,” the chief said.

However, he said, Foxx has regularly gone after police officers and too often paints them all as bad apples.

“She should be sounding like a prosecutor, not a defense attorney,” Weitzel said. “We should be working together to process cases, but she wants to do separate investigations of cases because of her mistrust of police. Stop painting everything the police do as wrong. We are both supposed to be working for the people.”

He said he has talked with other police chiefs in the area and many of them have the same frustrations with the state’s attorney, although he admitted that most are not as outspoken as him.

“Most of them aren’t as outraged as I am,” Weitzel said.

In a message to Riverside law enforcement personnel, the police chief said the response of Las Vegas area law enforcement in the wake of the shootings was extraordinary.

“For those who constantly want to criticize the police and say there’s a great divide between police and the citizens we serve, I ask them to watch the videos and listen to the reports coming out of Las Vegas,” Weitzel wrote in a message to department personnel following the shootings.

In a separate message last week to his town’s residents, Weitzel said that the actions of Las Vegas area law enforcement saved lives, assisted the injured and found shelter for survivors.

“In a day and age when pundits like to criticize police-community relations, the mass shooting in Las Vegas showed that police and civilians worked together seamlessly to save lives of individuals who they did not even know,” the chief wrote.

Weitzel said he expects the single-most-deadly mass shooting in our country’s history to be a turning point for America regarding regulating assault weapons.

He said although a small department, his officers regularly train for an incident like the Vegas shootings having a national attraction, Brookfield Zoo, within the department’s jurisdiction and major malls in the area.

“It is essential that we keep ourselves well trained and not even think this could not happen here — it could,” Weitzel warned his officers in his message.