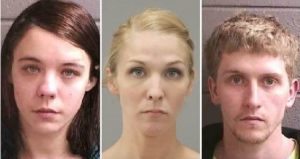 Cicero residents (from left) Theresa Calhoun, 22, Stephanie Ingersol, 29, and Eric Stamper, 23 were arrested in July by WEDGE agents in connection with the beating and robbery of a 77-year-old woman in Rockford (Photo courtesy of WEDGE)

Suburban Cook County police departments have been pushing back against the expansion of Chicago street gangs and drug dealers into the western suburbs for years.

But in 2016 they observed a new trend: Long guns and rifles were recovered in search warrants for narcotics and weapons, according to a new West Suburban Directed Gang Enforcement (WEDGE) Task Force report.

“For the first time in the WEDGE Task Force history, long guns or rifles were recovered in 2016,” wrote Riverside Police Chief Tom Weitzel, WEDGE chair. “[Shotguns and rifles are] becoming the choice of street gangs in the metropolitan Chicago area and you can see those tentacles reaching suburban police locations.”

The most notable 2016 WEDGE arrests and actions occurred mostly in Berwyn and Cicero, according to the report.

“Some of the cases started elsewhere but the arrest ended up in Berwyn,” Weitzel wrote in an email. “As crime knows no border the cases just take us/WEDGE where they may.”

Five long guns were recovered in February when WEDGE officers, on a warrant, searched the Berwyn home of Simon Estrada, a documented “22 Boy” in the 1900 block of S. Wenonah Ave., the report said. Also recovered were 11.7 grams of heroin, 3.5 grams of cannabis, three handguns, and $4,386 in cash. Estrada was later charged with 11 felony counts and three misdemeanor charges.

The WEDGE report lists four other Berwyn drug busts with recoveries of large amounts of narcotics, cash and weapons. 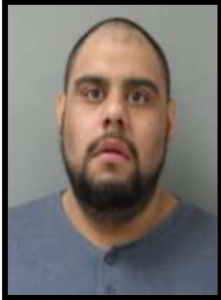 Five long-guns and three handguns, along with drugs and cash, were recovered during a February 2016, Berwyn search warrant leading to the arrest of Simon Estrada, according to a West Suburban Directed Gang Enforcement Task Force report. (Photo courtesy of WEDGE)

“Street Commander Sergeant Guy Papa, of Berwyn Police Department, is a superb supervisor and commands the respect of all WEDGE personnel,” Weitzel wrote.

The Cook County Chronicle was unable to reach Papa for comment, after leaving phone and email messages.

Other arrests in the report included a March residential burglary investigation, which led to a large drug bust in the 2600 block of South Ridgeland Ave. During the search warrant, police recovered 7,230 grams of cannabis, 71 grams of Ecstasy, 1 gram of cocaine, and $18,500 in cash. Victor Ballesteros, a documented member of the “2-6” gang, was charged with 11 felony counts.

Undercover WEDGE officers conducted a “buy/bust” operation and purchased 118 grams of heroin from Antonio Jenkins, a documented member of the Traveling Vice Lords, the report said. A search warrant executed in April, 2016 at Jenkins’ residence in the 1800 block of South Ridgeland turned up 100 more grams of heroin. The report did not specify charges filed against Jenkins.

In October, WEDGE executed a search warrant in the 3600 block of South Ridgeland Avenue and recovered 460 grams of cannabis and $1,565 in cash. Emmanual Macias was later charged with two felony counts, the report said.

WEDGE also helped locate three Cicero residents who were wanted by Rockford Police for allegedly beating and robbing a 77-year-old woman in July in a Rockford Wal-Mart parking lot for her purse. Local police described the robbery as “brutal.”

Eric Stamper 23, and Theresa Calhoun, 22, were taken into custody at a McDonald’s restaurant in Cicero. After an interview, WEDGE officers also arrested Stephanie Ingersol, 29. 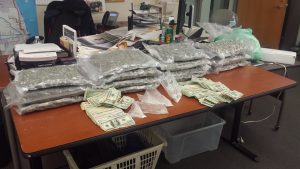 Drugs and cash confiscated by WEDGE officers in 2016. (Photo courtesy of WEDGE)

All told, in 2016, WEDGE operations recovered more than 200 grams each of cocaine and heroin, 8,200 grams of cannabis and more than $31,000 in U.S. currency. The task force also recovered four handguns and five long guns.

In March, the City of Berwyn announced the Berwyn Police Investigations Unit destroyed “approximately 1,400 pieces of drug/narcotic related evidence with an estimated street value in excess of $500,000,” according to a press release. Items were from closed cases or had court orders to destroy them, the city said.

Other suburbs are not free from gang members who move in and set up large drug operations. In July 2016, federal agents issued indictments and conducted arrests of 34 alleged Latin King members, many of whom lived in a region of Melrose Park and Maywood nicknamed “M-Town.”

WEDGE cooperates with investigations from federal agencies such as the Department of Alcohol, Tobacco and Firearms and the FBI. Weitzel told the Chronicle in July that more effective policing in Chicago has driven gang members to the suburbs, especially on the leadership level.

“What the average citizen doesn’t know is that high-ranking gang members, they hold jobs. They’re in the work force with their neighbors,” he said in an interview. “They’re not the tattooed guy with no shirt on that you see on television. The higher ups, they lay low. They own property, homes with well-maintained lawns. Some have children that go to (neighborhood) schools.”

“In 2016, WEDGE Task Force concentrated on removing street gang members from the community who were trying to set up operations in suburban communities or who were, simply put, an extreme danger to the community,” Weitzel reported.