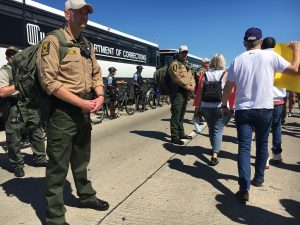 Police keep Dan Ryan marchers to two lanes at the start of the July 7 protest. (Photo by Irv Leavitt/for the Chronicle)

Here’s a summary of what I saw happen as an anti-violence march shut down Chicago’s Dan Ryan Expressway on Saturday, July 7: Illinois state government shoveled truckloads of treasure at a problem that didn’t exist, in an attempt to show blacks and liberals who’s boss.

The “I’m the boss” stuff failed miserably. But not the shoveling part — that was primo. Maybe Standard & Poor’s bond raters will demonstrate how impressed they are the next time the state needs to borrow a little money.

Even though the Dan Ryan and other Chicago expressways have been easily shut down numerous times for numerous reasons, Saturday’s march was somehow different. Leo Schmitz, director of the Illinois State Police, threatened marchers, upfront, with arrest. He and Gov. Bruce Rauner ignored Chicago Mayor Rahm Emanuel’s canny reaction that peace was a pretty good reason to shut down an expressway for an hour or so.

Rauner’s state police created a visual scenario on the Dan Ryan worthy of the most complex and overwrought scenes in “The Blues Brothers.” Starting at the march’s south end, at 79th Street, they filled the middle of the five northbound lanes with hundreds of state trucks and other large vehicles. These included Department of Corrections buses, just to get everybody in the mood.

Dozens of state police officers lined up along the western edge of the steel phalanx. They were joined by Chicago Police officers. The marchers got the two lanes on the east side of the expressway, and the traffic got the two lanes on the west, on the median side. As the marchers kept walking north, the cops followed alongside, apparently to keep people from sneaking between the bumpers and hurling themselves to premature death. 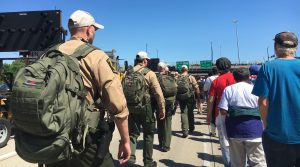 Nobody I met on the highway seemed to mind much that they weren’t blocking the whole road, as planned. They sensed a compromise afoot, and were willing to just continue that way until the march was to end at 67th Street. Then they’d get on their buses and go home.

But Pfleger and the other organizing pastors and activists stopped about halfway through, and started making demands to close all the northbound lanes for marching. What good was civil disobedience when the government was successfully shunting you just where it wanted you to go? And using the entire might of your near-bankrupt, pitiful governments to do it?

Walking on the side of the road was a literal acceptance of being marginalized.

As negotiations went on, people on the pavement understood what was at stake. A young organizer asked me, “If we have to end it here, is it a failure? We’ve attracted a lot of attention.”

It’s not the biggest failure in the world. But it ain’t exactly success, I told him.

“I think it’s a success,” he blurted, and bolted into the crowd, tears in his eyes.

With thousands of people heading in one direction, it was hard to stop them on a dime when the organizers decided they didn’t want to lead a quickly forgotten parade of losers breathing the fumes of uncaring Loop-bound traffic. 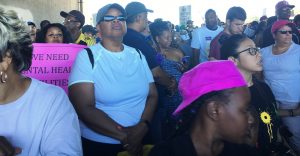 Marchers wait for negotiations to close the Dan Ryan to conclude. (Photo by Irv Leavitt/for the Chronicle)

So the organizers asked everybody to move back, and thousands of people cheerfully complied, to reduce the pressure on the officers.

As negotiations continued, the marchers chatted and took group photos. A handful of people climbed the embankment to fetch water bottles to pass around.

What went on among the marchers was generally on the chaos level of a North Shore retirement home lawn party.

Perhaps the chaos he referred to involved the hour-long traffic jam behind the marchers after the whole northbound Dan Ryan was finally closed, though everybody who could get off the highway did.

But If Rauner hadn’t fought the city’s willingness to close The Dan, the on-ramps would have been blocked by police, and no one would have been stuck on the highway. He created his own hell.

Rauner was acting out a version of a famous ironic joke: A kid kills his parents, and throws himself on the mercy of the court because he’s an orphan.

He insisted on fighting the milquetoasty marchers, and he put officers of the Illinois State Police — one of the most professional law enforcement agencies anywhere — in the position of thwarting the will of the people. 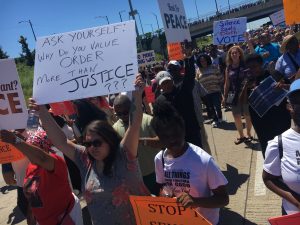 If you’re in the habit of speeding down Chicago’s expressways, you’re aware that for years, Illinois State Police officers’ presence on any of those highways has been relatively rare. That’s because the state can’t afford to let them patrol there. But occasionally, something superimportant happens that justifies overtime.

Perhaps Rauner saw Saturday’s event as that moment. And, apparently, it was also a moment that required many trucks to be driven on a Saturday, for no other purpose than to block the movements of extremely cordial people.

It’s interesting that Rauner so feared these marchers that a double row of state and city police was inadequate to guard, say, a nice double row of construction cones. He needed rolling steel.

He was trying to fight off a few thousand people who were led by pastors, for goodness sake. People were carrying crosses, and pushing each other in wheelchairs. The Chicago authorities understood who was going to be out there, and reminded the Governor that these were people who were anti-violence, and were marching for peace.

But the state of Illinois attempted to corral and channel them as if they were members of street gangs, or senseless cattle.

Pfleger made it clear that closing a highway isn’t a victory. It’s an attempt to get attention for a movement to create the kind of city in which fewer see crime as an alternative. We’ll be writing about that here in the future. 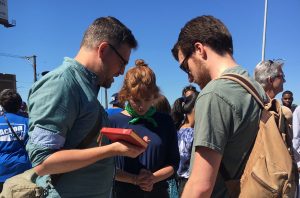 Three marchers pray July 7 before heading to the Dan Ryan. (Photo by Irv Leavitt/for the Chronicle)

But July 7 was a victory nevertheless. Among the winners were the officers of the Chicago Police Department.

It didn’t start out that way. There were scattered chants during the march: “CPD, KKK, how many kids did you kill today?”

But then Chicago Police Superintendent Eddie Johnson took part in the negotiations, on the side of the marchers. After his officers cleared away the obstacles, he joined the marchers as they headed out onto the completely stopped Dan Ryan, shoulder to shoulder with Pfleger.

After the march broke up at 67th Street, I saw many people wave and smile at Chicago Police officers.

Unlike the CPD, it’s a rare Illinois State Police officer who has been accused of an unjustified killing. But I heard only one person thank a state police officer.