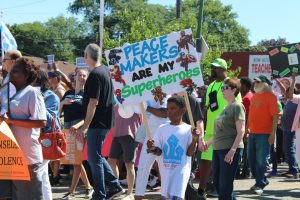 People of all ages came out to march for an end to gun violence, police reform and other issues on long the Dan Ryan from 79th to 67th streets Saturday, July 7.  The march was organized by the Rev. Michael Pfleger and other Chicago church leaders. (Photo by Kelli Duncan / for Chronicle Media)

Protesters showed up in the thousands to shut down the northbound lanes of the Dan Ryan Expressway from 79th to 67th streets in the Rev. Michael Pfleger’s peace march on Saturday, July 7.

The march was held to protest gun violence in Chicago, but participants held signs advocating for a variety of issues from police reform to community funding to immigrant rights.

But even with so many different causes represented, the group’s message remained clear — more needs to be done to stop the violence in Chicago’s communities.

The protest began shortly after 10 a.m. when Rev. Pfleger and his fellow pastors led protesters out from the fenced area where they waited, down 79th street and onto the expressway.

Many protesters chanted things like “shut it down” and “this is what democracy looks like,” as they walked down the ramp. One woman became emotional as she repeatedly shouted “Stop the violence” into a megaphone.

Illinois State Police and Chicago Police initially set up barriers to limit protesters to the shoulder and two right-hand lanes of the expressway, allowing traffic to continue in the left lanes.

Protest organizers later reached an agreement with police and they were allowed to block all northbound lanes until they reached 67th Street, when protesters began to exit the expressway.

Gov. Bruce Rauner’s office released a statement earlier in the week saying that any participants who tried to cross police barriers would be arrested. Several Illinois Department of Corrections buses sat on standby, forming part of the barrier, but police did not report any arrests.

Police were able to reopen the expressway shortly after the march ended and traffic began flowing again around 12:45 p.m. 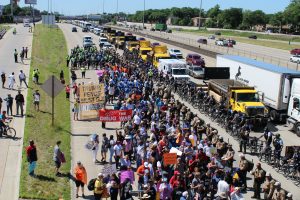 Thousands marched along the northbound lanes of the Dan Ryan from 79th to 67th streets as a call for peace and other issues on Saturday, July 7. (Photo by Kelli Duncan / for Chronicle Media)

Rauner expressed his disappointment with the disruption caused by the march via Twitter Saturday afternoon (July 7) , calling it “unacceptable.”

He criticized Mayor Rahm Emanuel for allowing the protest to block all four lanes of traffic and urged him to “put an end to this kind of chaos.”
Emanuel responded to the post less than an hour later, tweeting “It was a peaceful protest. Delete your account.”

According to a recent report by the Chicago Police Department, the number of reported murders in Chicago has gone down 23 percent from this time last year with 254 murders reported in 2018 so far.

Although these statistics show the first decline in violent crime in Chicago in years, Rev. Pfleger said in a press conference that he does not believe enough progress is being made.

Retired Chicago Police Officer, JoAnn Taylor said she came out to the march with her two grandchildren to show her support for an end to gun violence. 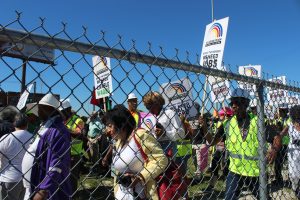 A broad coalition of people came out to march along the Dan Ryan calling for peace and an end to violence in city neighborhoods on Saturday, July 7. (Photo by Kelli Duncan /
for Chronicle Media)

“I do believe the criminals in our streets are getting younger and more violent,” Taylor said. “And I believe the only way to really curtail that is to have more resources in our community to provide other opportunities besides this kind of violent life that the streets are luring them into.”

Taylor said she has a unique perspective on the issue of gun violence and police reform in Chicago because of the 25 years she served with the Chicago Police Department.

“We need more community involvement with each other — the police officers and their communities,” Taylor said. “Let’s show that we are working together more than apart because we all just want to make Chicago a safer place to live.”

—- Pflager leads thousands on march for peace down Dan Ryan —