Tens of thousands of people experienced the 2017 Wizard World Comic Con Chicago over a four-day weekend Aug. 24-27 at the Donald E. Stephens Convention Center in Rosemont. 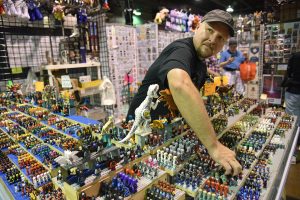 Friday celebrity appearances included Loni Anderson of “WKRP in Cincinnati” late 1970s to early 1980s television series fame, Barry Bostwick of “The Rocky Horror Picture Show,” Dean Cain as Superman and Lou Ferrigno, the legendary Hulk actor, who is also renowned for his role in the American sitcom, “The King of Queens.”

An oversized Hulk statue towered over attendees as they entered the convention center lobby, setting the tone if folks were stoked to see Ferrigno in person.

“You have the overzealous fan that’s been coming here and I connect with the fan and they ask me personal questions and they get excited,” Ferrigno said. “I put a smile on their face because they give me a lot of support.” 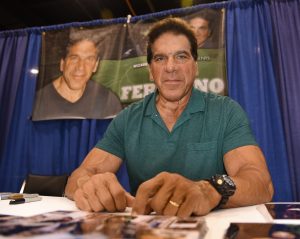 As one of the potential blockbusters of the holiday movie season, the film “Thor: Ragnarok” will open on Nov. 3 in theaters. Hulk makes an appearance.

“I think it’s great because Hulk, every time he’s in a movie, he’s the star of the show,” Ferrigno said. “But it’s interesting, seeing him this time with a shield and a sword coming out of the arena. I think that’s going to be the climax of the film.” 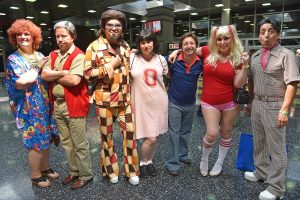 “We’ve been talking about this all week,” said Eric Aponte of Skokie, whose son Logan Aponte, 3, donned a homemade NASA spaceman backpack with bluish working lights.

Oct. 31 this year will be a memory maker too for the Aponte family. 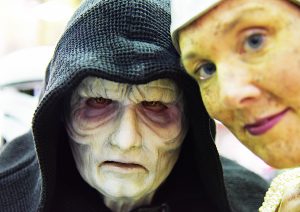 “He’s (Logan) going to be an astronaut for Halloween, I’m making the costume,” Logan’s father said with a smile. “We’re working the details out. Handmade is just better, it has the personal touch.”

Stout wore a blue and yellow caped costume as the mascot for her company booth. She appeared as Captain Compass and had her airbrush color portrait drawn by artist Daniel Reyes of Orlando, Fla.

“I’ve never had anyone draw me before,” Stout said, smiling.

“It’s something that I enjoy,” Reyes said, of his contribution and career. 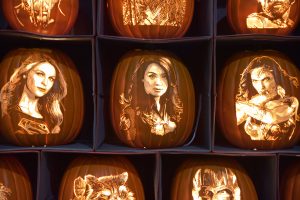 Alex Wer of Sacramento, Calif. is known as The Pumpkin Geek. He sold pumpkins made of permanent material with custom artwork of favorite comic figures. (Photo by Karie Angell Luc/for Chronicle Media)

Alex Wer of Sacramento, Calif. is known as The Pumpkin Geek. He sold pumpkins made of permanent material with custom artwork of famous comic figures.

“I quit my day job (mortgage industry) a few months ago, a real job,” Wer said with a laugh. “I started doing this full time.”

While Wer has maintained a part-time job with access to affordable family health insurance for more than a decade, 2017 Wizard World Comic Con Chicago was technically among Wer’s first gigs as a career vendor and self-employed master carver

“I love doing these,” Wer said, proudly referring to his pumpkins in a booth in the back of a large exhibition hall. 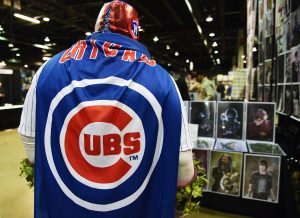 Some fans who queued to be in place for the event’s noon opening time on Friday also had their own personal launch experiences. 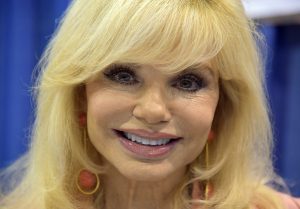