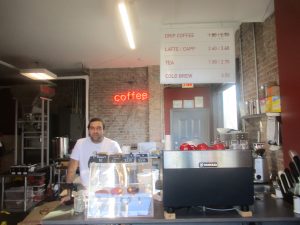 “Sputnik” is a fairly common Russian word. It means “fellow traveler.” That is why it’s not unusual for a Russian city to have a few businesses that use it in their names. For example, St. Petersburg

has a Sputnik construction company, a hotel, a tour organizer and logistics company, among others.

But in United States, most people associate the word with the Soviet Union’s — and the world’s — first artificial satellite, whose launch kicked off the space race. An American business with that name is unusual enough — which makes it all the more striking that Chicago has two.

The Portage Park based Sputnik Books & Records came first, opening its doors in the fall of 2015. The Back of the Yards based Sputnik Coffee launched its coffee roasting component last year, and it opened a coffee shop this spring. But, in spite of the similar names, the two have nothing to do with each other. And while that has occasionally caused some confusion, the two businesses believe that they are different enough that they can continue to co-exist.

Sputnik Books & Records was built on the foundation of two businesses launched by husband and wife Joe and Melissa Basilone. The couple, who lived in Portage Park since 2007, opened the Thrift and Thrive thrift store in 2011. Melissa Basilone explained that they wanted to launch something that fit their interests and something that would help revitalize the shopping strip around the intersection of Irving Park Road and Austin Boulevard.

“[The] economy was suffering at the time and the neighborhood was suffering as well,” she recalled. “A lot of homes were foreclosed [on]. There was a lot of wonderful stuff in the alley that they were getting rid of quickly.”

They thought that, instead of throwing it away, residents should have a place where they could take their objects. That way, it stays in the community.

At the time, a coffee shop was operating across the street, at 6032 W Irving Park Road. When it closed after two years in business, the Basilones saw the opportunity. Joe Basilone had 15 years of experience in the coffee industry, and the couple opened the Perkolator coffee shop in September 2014.

A year later, a storefront next door became available. Originally, Basilones wanted to use it to put in more tables, but then, they realized that they wanted to do something more.

“We decided to make a space as a used books and records store,” Basilone said. “It was something that the neighborhood needed and didn’t have yet.”

When asked what inspired the bookstore’s name, she said that they were thinking of a name that would signify something “vintage and older” without sounding like something they’ve already done. And her husband started thinking of it as a “satellite” to Thrift and Thrive.

“We thought [about] names of satellites, and Sputnik came up,” Basilone said. “[Its launch] happened so long ago, and the concept of Sputnik is kind of vintage piece.” 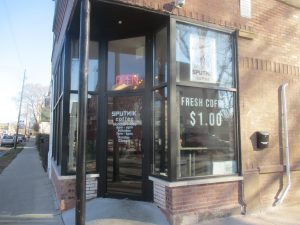 The Perkolator already had some vintage influences in its design, and they decided to take a retro space theme approach, painting a mural with Sputnik on it and decorating the wall with posters of mid-20th century magazine covers and other objects from the era.

While the space has its own door, the owners keep it closed, with the sign instructing customers to enter through the Perkolator. Basilone said that was deliberate.

“[Sitting in the] coffee shop, it’s a nice way to slow down,” she said. “A lot of people go there to work and relax, and what could be more relaxing than sitting in a bookstore? They complement each other very well.”

The store currently has some tables, with most of the records stashed near the front and along the west wall, with bookshelves lining the remaining walls. As is often the case with used bookstores, there is a lot of variety in both fiction and nonfiction.

Basilone said that Sputnik Books & Records has been fairly well-received, saying that residents were glad to have a business like that in their community.

“The community was very receptive to a used books and records store and very grateful,” she said.

Ultimately, they see their businesses as a way to do their part to build the community by strengthening one of its major commercial corridors. That way, the money stays in the community, and everyone benefits. The foundation, Basilone said, is already there — they are just building on it.

“We have some anchors in the community and we’ve been trying to build off those anchors,” she said.” [We want to] have places to visit that are local, instead of having to go to the mall.”

Sputnik Coffee started out as a coffee roaster. It was the brainchild of twin brothers Greesha and Vova Kagan, their high school friend Michael Roytman and another friend, Diarmuid Horan. Like many small business owners, their main inspiration was trying to create something they wanted, but nobody else would make. In their case, they weren’t happy with the quality of coffee they drank. As Greesha Kagan explained, his brother wasn’t happy with the coffee he drank in his office. He and Horan used to talk about how they could make something better. Seeing one of their friends bring in coffee he roasted inspired them to buy a coffee roasting machine — and the business grew from there.

As for the name, Kagan explained that his family immigrated to United States from Russia in the early 1990s, when he and his brother were just children. The name was a nod to their roots, as well as the reference to the fact that many of their customers took their beans on the road as gifts. So, he said, in a sense, the coffee was a “traveling companion.” 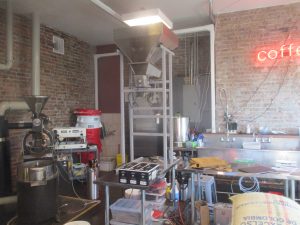 Coffee roasting area in the back of Sputnik Coffee. (Photo by Igor Studenkov/for Chronicle Media)

As the demand grew, the founders decided to find a full-fledged, standalone space. Kagan said that they always aimed to make their coffee affordable —something better than mass-produced coffee they didn’t like, but cheaper than “craft coffee” such as the roasts made by roasting companies such as Intelligentsia Coffee & Tea and Metropolis Coffee. This meant that they couldn’t spend too much money on rent — so they looked on the South Side. The father of Horan’s girlfriend offered them a space in the Back of the Yards, at 2057 W. 51st Street.

“Coincidentally, he had a [vacant] storefront, which was [previously] a small grocery store, a convenience store,” Kagan recalled. “He said ‘I always had that corner I always wanted to do something [with]. If you guys are crazy enough to do it, knock yourself out.’”

Kagan recalled that the space was in bad shape, but they persevered, replacing the windows, the floor and the ceiling and significantly rehabbing the interior. They officially launched in the winter of 2017. Kagan said that a coffee shop component was something they decided to do early on, but between the permits and inspections, it took longer than they expected. He said that there were so many delays that they didn’t even schedule a proper opening, just in case something went wrong. So when they quietly opened in the end of April 2018, they were pleasantly surprised that they got a decent crowd.

Kagan said that the number has been slowly growing since then.

“We got a good stream of regulars coming from the community,” he said. “Because you got to have a lot of community support [to make it].”

The coffee roasting side has been growing as well. Kagan said that their roasts are available in approximately 45 grocery stores, cafés and restaurants throughout Chicago area. 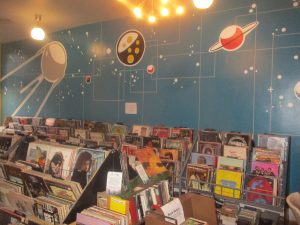 When asked how much of their business is roasting and how much is the coffee shop side, Kagan said that they actually complement each other.

“At first, we thought it would be separate things, but one kind of helped the other,” he said. “We have wholesale before we opened, and wholesale helped the café be a possibility, and the café help us pay bills when we do wholesale.”

The Kagans and Horan work in the coffee shop full-time, and they’ve done well enough that they were able to hire their first employee. And Kagan said that he expects the business to continue to grow, even if it takes time.

“For people to become regulars, for people to change the habits, it’s [a] hard thing to do,” he said. “It takes a while to switch from big national coffee companies to try local,” he said. “It’s nice, because we have those regulars, and we appreciate quality of the coffee, the price and the taste. You got to stand out somehow, and our flavor and the price point kind of help.”

Both Basilone and Kagan said they were well aware of each other’s businesses’ existence, and both had customers wondering if the two businesses were related. Basilone said that she knew customers who wondered if Sputnik Coffee carried Perkolator roasts. And she said that while she and her husband considered asking them to use a different name, they decided against it. They reasoned that it wasn’t worth the trouble, and besides, “they were doing their own thing.”

Both businesses use logos that evoke the lettering of Soviet propaganda posters, and both logos use a Cyrillic letter “И” in place of an “N.” But the fonts are different, and there are some differences in terms of color and design. The bookstore logo is black with a red star in the “P” and the image of the Sputnik satellite right above the lettering, while the coffee shop logo is plain red text. 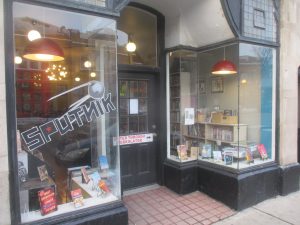 Basilone said she hasn’t been to the coffee shop, but Kagan said he actually visited the Perkolator once — and he liked what he saw.

“It’s a great coffee shop,” he said. “We are obviously doing something a little different, because we do basically [just] coffee, we have pastries and we don’t have sandwiches.”

Kagan said that, generally, he doesn’t see independent coffee shops as a competition. The real competition, he said, are big chains like Starbucks. He recalled how, when he and the other co-owners were renovating the space, they went to Back of the Yards Coffee, a coffee shop and roaster approximately four blocks to the north, to get coffee. He spoke warmly of its owners, as well as the owner of Kusanya coffee shop in the Englewood neighborhood further south.

Kagan said he was impressed that Perkolator managed to last for several years. And, in the end, he felt that there was no reason why the two Sputniks couldn’t coexist.