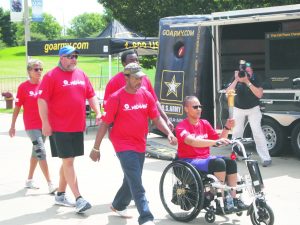 LeToi Adams leads a team of veterans from the Armed Services during the torch procession Aug. 14 during the Opening Ceremony for the Valor Games, a competition for service veterans with a disability, at Soldier Field in Chicago. (Photo by Kevin Beese/Chronicle Media)

Anthony Dunbar wasn’t having any of it when his friend and fellow Army veteran Isaac Gilmore got the best of him early on in the archery competition at the Valor Games outside Chicago’s Soldier Field.

“Someone is shooting for him!” Dunbar laughed Aug. 14 as he sat on his walker, his back to his friend as Gilmore topped his first-round score by more than 20 points.

It was the first time Gilmore had ever tried archery.

“Stop shooting for him!” Dunbar reiterated, feeling he should have the upper hand after competing in the archery competition last year.

Later as Dunbar entirely missed the archery target, he quipped, “I almost shot a bird.”

Both men will be part of an archery team that Hines Hospital is looking to get started and were happy to get instruction on how to use archery equipment.

Veterans with a disability converged on Chicago last week (Aug. 13-15) for competition and camaraderie in the Valor Games Midwest. 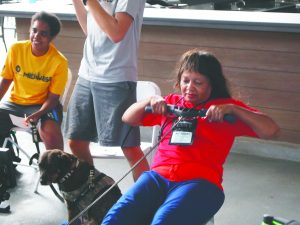 The participants competed in archery, indoor rowing, power lifting, cycling and field events during the three days of the Valor Games.

The Chicago Park District first presented the Valor Games Midwest in 2011 and has done so for the last seven years, only having missed in 2017 to co-host the Warrior Games with the U.S. Department of Defense and the U.S. Navy.

Juan Cornejo of Berwyn, a Marine who was injured by explosions in Afghanistan, said the Valor Games gave him an opportunity to send a message to his kids.

“I am here for my children. I want them to see that I was not stopped by injury,” said Cornejo, who had to learn to walk all over again at the age of 31. “I want them to put the video games down and have an active lifestyle. I will tell them, ‘I did it. You can do it.’”

“My body may be broken, but it doesn’t define me,” Cornejo told his fellow Valor Games participants in kicking off the games during the Opening Ceremony. “There is a lot of fight left in me.” 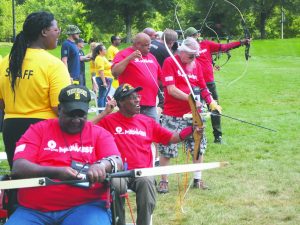 Isaac Gilmore (second from front) reacts as he completes a successful archery shot during the Valor Games. (Photo by Kevin Beese/Chronicle Media)

Cornejo said his memory has been effective following the accident. He said his wife was accompanying him to ensure he got to all his events.

The Berwyn Marine finished second in power lifting and planned to compete in all of the Valor Games contests, simply enjoying the opportunity to compete.

He noted that all of the Valor Games activities are free of charge for the veterans.

“This is a chance for our veterans to compete in events,” Grose said of the Valor Games.

Grose said a lot of the former service members who get involved with the Park District’s Veterans Program learn about the activities through the Jesse Brown Veterans Affairs Medical Center. 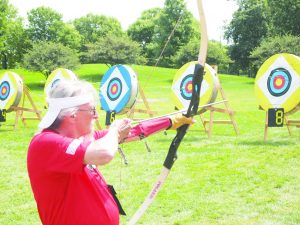 Dennis Scanlan, a Marine Corps veteran from the South Side of Chicago, takes aim during the archery competition. (Photo by Kevin Beese/Chronicle Media)

Grose said experts like the Lincoln Park and North Shore Archery clubs being on hand to help veterans learn about the individual sports made the event special.

Jim Schneider of Rolling Meadows, a member of the North Shore Archery Club, said being able to teach veterans about the sport was rewarding. During the afternoon session Aug. 14, he taught Patrick Greene of Chicago how to shoot an arrow at the target as Greene was picking up a bow for the first time.

“In the morning session, I taught a guy to shoot with his teeth because he didn’t have hands and he got a bull’s eye,” Schneider beamed. “I don’t know about him, but I’m still excited.”

Gail Hayes, an Army veteran who served during the Vietnam War, kept an easy pace going while warming up for the indoor rowing competition in a sectioned-off area on the Soldier Field concourse. 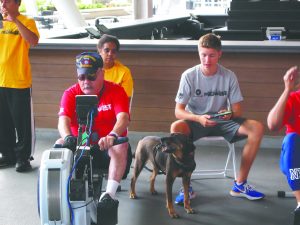 Vincent Zamora of Chicago gets ready to compete in the indoor rowing competition as his dog, Sergeant, looks on. (Photo by Kevin Beese/Chronicle Media)

“You guys kill yourselves, I’m just relaxing,” the Gary, Indiana resident said while warming up for the competition.

When the competition began, however, Hayes worked as hard as any competitor.

It was the second time Janice Lopitan, an Army veteran from Atlanta, competed in the Valor Games Midwest.

“It’s uplifting for my life to be here,” Lopitan said of making the trip to Chicago for the competition. “I battle depression. It is great to be included with other veterans.”