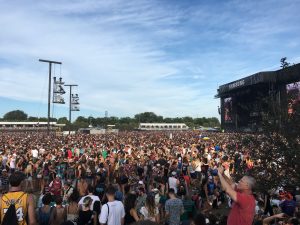 The Office of Emergency Management and Communications said that Cook County police reported only 12 arrests and 16 citations over the four-day festival compared to 34 arrests in 2015. See story on page 13. (Photo by Kelli Duncan/for Chronicle Media)

Food vendors at Lollapalooza worry they might be missing tens of thousands of dollars in sales transactions made with an app using electronic-pay festival wristbands, they said.

“The wristbands worked about one out of every 30 times and we lost a fair amount of business Thursday,” Brunacci said. “But the Appetize staff stayed until about 2:30 in the morning to fix the problem and the wristbands worked for the rest of the festival.”

Franks ’n’ Dawgs closed in June as a Chicago restaurant, but the company offered its “upscale streetfood” at the fest, including truffle fries, bacon sausage with bacon mac-n-cheese or mustard potato salad topping a gourmet sausage.

Kevin Anderson, CEO of Appetize characterized the festival setting in Chicago’s Grant Park as not having adequate network capacity for the wristband program to work. But Anderson denied that any kind of software problem was causing sales numbers to be inaccurately reported.

But some vendors complained final sales totals issued nightly by the festival were significantly lower than figures appearing on Appetize-issued iPads during the day. The system did not allow restaurateurs to check their own accounts, they said. One vendor thinks about $23,000 worth of sales were not credited. Another guessed the restaurant was shorted “between $9,000 and $10,000.”

Vendors agreed something was odd with the totals, Brunacci said.

“The number sent to us as ‘here are your sales,’ was very different and significantly lower,” he said.

“I looked at my reports and I was taken aback by the number of transactions. I thought, that can’t be right.”

Those discrepancies have caused vendors to question the festival finances and whether they are out significant money, Brunacci said. “[The incorrect numbers] are the part that I think has created for vendors an enormous amount of distrust.”

“The reporting system this new provider [Appetize] offered was horrible,” a different restaurant owner, who asked not to be identified, said in an email. “No online reporting, numbers only available via tablets during the day, numbers disappeared right around 10 p.m. so couldn’t check them after close.

“Once we received emailed reports, they were confusing and didn’t seem to make sense,” the vendor added.

Brunacci said he used disposable food baskets as his inventory indicators and noticed he ran out of 4,500 of them for one dish and 7,500 from another. He thought final sales numbers appeared too low, but said he still needed to complete research. 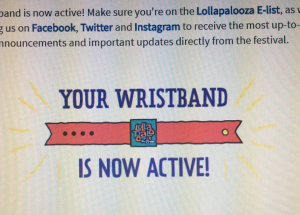 Meanwhile some vendors were satisfied with their numbers.

“We were fine on counts,” said Josh Rutherford for Smoke Daddy. Charlie Robinson of Robinson’s ribs said his sales were “fine.”

Lollapalooza celebrated its 25th year in 2016. For the past couple of years, Chicago Chef Graham Elliot has “curated” the vendors in Chow Town, the festival’s aisles of food stalls. Many apply, but few are chosen.

Lollapalooza festival vendors are a select group of only 32 restaurants, who feed more than 100,000 attendees. For this reason, vendors were reluctant to speak on the record.

“A lot of people don’t want to bring [sales total problems] to light and risk losing next year or losing a business partnership,” said one vendor.

But Brunacci was willing to speak because after seven years he’s not coming back.

“I’m not ashamed to say [Lolla] totally kicked my ass this year,” he said. “It’s a monstrous undertaking,” he said. “You are committed to this [amount of] product and you are screwed if you don’t have a good number. It’s scary and I can’t relax until the last day.”

Sales totals can be affected by heavy rainstorms, which sometimes leading to an evacuation of the park.

“You see me looking at clouds and I’m terrified,” Brunacci said. “Some people have a stronger appetite for risk, but I’m in such a knot for two weeks before the festival.”

Unlike some other music festivals where vendors pay up to 30 percent of sales at the end of the festival, Austin, Texas-based organizers C3 require a $15,000 payment upfront to sell food at the Grant Park fest, which expanded this year to four days from three.

“When we walk in, we are $50,000 in the hole,” Brunacci said. “Historically by Sunday you are praying for a good day and if you have it, you will have paid all of your bills.”

Vendors said they got a message from organizers at C3 asking to document proof of sales based on inventory and what was left over.

Brunacci said he appreciated festival organizers and Appetize for asking for details without being defensive.

Even with problems and all, he said he preferred the Appetize app to the previous system. In the past, the Point of Sale (POS) system would not credit vendors for credit card sales that were declined. Franks ’n’ Dawgs saved “thousands” with that feature because food us usually passed to customers before a credit card declines, he said.

He wasn’t sure whether he had lost money, but he said many vendors would be nervous and a significant loss might knock them out.

“They’re small businesses, not companies with millions stashed away. You’re not gong to retire rich on one Lolla. It’s hard, with weeks and weeks and weeks of preparation. If you earn $10K in profit you should consider yourself really lucky.”

As of Friday, some vendors had been offered a small restitution from Front Gate Tickets, the company that maintains the finances.

It wasn’t sitting well with some.

“I can’t believe this, I don’t know what to say,” texted one vendor, who believed there was a shortfall more than $20,000.

Northwestern University Professor of computer science, Fabián Bustamante, said the app developers should have factored environmental interference into every design –which could have prevented the Thursday wristband fail.

“Signal interference, even at the scale happening in the festival, is something the developer needs to account for,” Bustamante said. “There are protocols starting at the network level that deal with problems of interference.”

As for the conflicting financials, Bustamente said he would expect the software to keep a client-side log, recording the sales reported to the server.

“It would be a reasonable thing, if you’re paying [the entrance fee] to Lollapalooza that clients should see how the logs of the client iPad and the festival reconcile,” he said. “The system and developer should have a way for a third party to check that.”