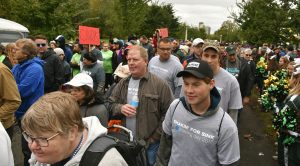 The sixth annual Moving Day Chicago on Oct. 15 brought out more than 2,000 participants on an overcast and windy Sunday morning in the south fields of Lincoln Park in Chicago.

With more than 160 registered teams, funds raised were quickly approaching the goal of $450,000 to benefit the Parkinson’s Foundation. The two-mile walk brought participants through Lincoln Park.

Temperatures were in the mid-50s with the sun peeking out at times. 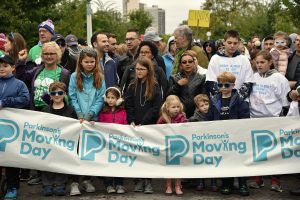 The two-mile walk is about to start before 11 a.m. (Photo by Karie Angell Luc/for Chronicle Media)

There were tables set up with information about the latest prescribed medications. Healthy snacks and giveaways like lip balm and pens were part of the offerings.

A presentation on stage before the walk included retired professional football players who gifted a white keepsake football. 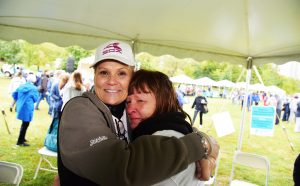 “Volunteering allows me to give back to the community,” said Kestrel Felton of Rockford.

The mood was upbeat and there were emotional moments.

Mary Jo Obrzut of Chicago, a retired Chicago police officer who has a part-time job working in sports security, was diagnosed with Parkinson’s five years ago.

She became tearful hugging her family, which included her younger sister Judy Obrzut of Chicago, also a police officer. 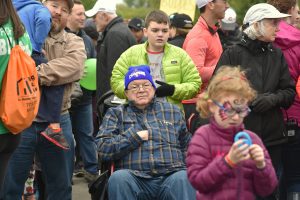 Jacquie Axes (upper right) of Evanston, is about to start the two-mile walk with her spouse (seated) Kevin Axe of Evanston. Also seen in green is Sean Benson, 14, of Chicago. Jacquie Axe is diagnosed with Parkison’s. (Photo by Karie Angell Luc/for Chronicle Media)

“Thank you very much for everybody being here,” Mary Jo Obrzut said, to all supporting a cure for Parkinson’s disease.

Her family carried a white fundraising team sign that said, “The Magic of Mar Mar” in honor of Mary Jo Obrzut.

Robert Lyman Baittie of Vernon Hills, diagnosed with Parkinson’s in 2012, is the author of the 2014-released book, “Tremors in the Universe: A Personal Journey of Discovery with Parkinson’s Disease and Spirituality.”

“Attitude and exercise which we’re promoting here at Moving Day are the two most important things,” Baittie said. 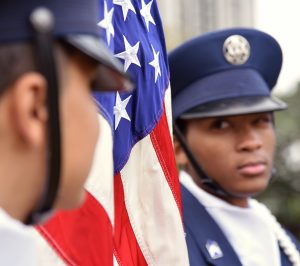 James Carr (left), 18, of Chicago and a student at the Air Force Academy High School of Chicago, checks in with his Color Guard peer Tyshon Sullivan (right), 17, of Chicago. (Photo by Karie Angell Luc/for Chronicle Media)

Of his diagnosis five years ago, Baittie said, “In all honesty, it changed my life for the better.

“I was overwhelmed with a sense of calm,” he recalled, of the day he learned of his Parkinson’s disease diagnosis.

Baittie said having, “a positive attitude that I bring to it,” makes the difference.

Jacquie Axe of Evanston was diagnosed with Parkinson’s about one year ago, she said. Family accompanied her to the event. With a smile, and as Axe was about to begin the walk, she offered her takeaway message.

“Parkinson’s people can do many things, including go on a two-mile walk,” she said. 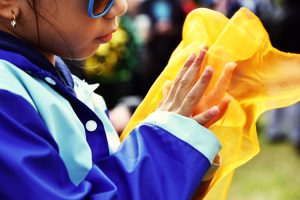 Shortly after being given this scarf, and for several minutes while seated on her mother’s lap, Vivienne Castaneda, 8, of Portage, Ind., moves her fingers, feeling the fabric movement as the scarf folds into her hands. (Photo by Karie Angell Luc/for Chronicle Media)

Parkinson’s disease is a progressive neurological disorder that affects nearly 1 million people in the United States and 10 million patients worldwide.

Parkinson’s is the second most common neurodegenerative disease after Alzheimer’s and is the 14th leading cause of death in the United States.

It is associated with a loss of motor control (shaking or tremor at rest and lack of facial expression) as well as non-motor symptoms, such as depression and anxiety. While research is being conducted, there is no identified cure for Parkinson’s disease. 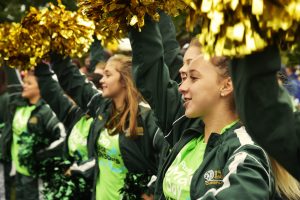 The Parkinson’s Foundation strives to improve lives for people with Parkinson’s by supporting care and advancing research toward a cure. Visit www.parkinson.org.

—- Weather cooperates as teams raise funds for the Parkinson’s Foundation  —