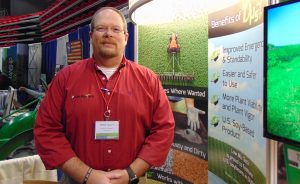 China is not buying and U.S. soybean producers continue to feel the pinch.

A trade dispute between the two nations has seen sales of raw soybeans to the China market plunge since that country slapped a 25 percent tariff on imported product last year in retaliation for Trump Administration duties on Chinese goods.

But the soybean trade is also not entirely bleak.

“The only thing that’s not being shipped right now is whole bean,“ said Brian Tulley, managing partner of Iowa-based Low Mu Tech, makers of a soybean-based agricultural lubricant. “Soybean meal and processed beans are still going out, so we still have exports going to to China every day.”

“It’s a frustration, yes, but the farmers are tired of giving China incentive and them taking advantage of us and running the markets up and down,” Tulley said. “There is no trade parallel. Now there is trade parallel. (Farmers) are willing to suffer through some of that because they see a long-term benefit.”

Soybeans are a highly versatile crop. High in nutrients and protein, it is a popular feed for pigs. Other soybean oil uses range from ink to fuel to vegetable oil.

Processed soybean products  remain a bright spot in trade between the two countries.

But as part of the ongoing trade war, Chinese companies stopped buying in 2018 and soybean sales to China dropped 94 percent from 2017, according to a New York Times report.

In November 2018, China made no soybean purchases at all.

Soybeans are the No. 5 crop in the United States, which is the world’s top producer and leading exporter.

In Illinois, soybeans are the No. 2 crop and top agricultural export. The market was worth $5.65 billion in production according to 2014 sales figures from the University of Illinois Extension Service.

The two countries called a truce in their trade war, and both sides have continued to talk about ways to ease the trade war.

But in a positive development, China made a 1.13-million-ton purchase of U.S. soybeans in December and more in January.