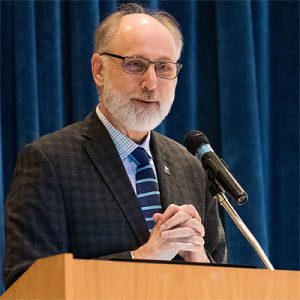 But, both Baker and the Board knew what was coming as early as August, 2016.

“Until now, Illinois state law and the OEIG investigation process have required that this matter be confidential,” Baker posted in a statement on the university website.  “As such, I have not been able to be as transparent as I would have preferred, but I am now able to directly address this issue.”

Likewise, Board Chair John Butler published a statement from the board May 31. “The decision to publish the OEIG Final Report finally provides us with the opportunity to address this matter with the NIU community,” Butler said.

The crux of the OEIG report lies in findings that President Baker hired a handful of outside, high-priced consultants without putting the contracts out to bid. State procurement rules require any contract more than $20,000 to be placed out to bid, but Baker, who had just started at the university, wanted specific consultants he knew from his previous employment as Provost of University of Idaho from 2005-2013, the report said.

The two highest paid consultants, organization coach Ron Walters and Nancy Suttenfield, a finance expert, were paid $463,125 and $425,041 respectively, making them the highest paid employees at the university with salaries higher than the football coach and Baker himself. Baker circumvented the procurement rules by asking his HR personnel to categorize the consultants as “affiliate employees” a category of part-time associates who worked for a brief period and typically taught a class. The OEIG report listed three other consultants who were categorized in this way, with payments ranging from $135,963 to $23,000. Additionally, Walters was allowed to stay for no-charge in university housing until NIU charged him more than $30,000 in back rent. Baker authorized creative financing methods to pay consultants’ high-fees by making sure Walters received bi-weekly paychecks for $15,000, regardless of hours billed and by paying other consultants with funds from the university’s foundation. One consultant was allowed to use a university credit card for personal items.

Baker’s statement on the school website asserts that he made bold, effective steps because he was hired to lead a campus in crisis. When he arrived in 2013, the campus police department was being investigated by the FBI and the finance director had taken a leave of absence, Baker wrote.

“There was a need to quickly engage outside experts skilled in culture change and financial management for an unbiased and comprehensive assessment,” he said. Baker said he was new to the state rules and relied on human resources and legal staff to make decisions.  “At no time did I intend for myself, or any of my staff, to violate any polices or procedures,” he wrote. Baker was not available to comment directly, the university’s press office said.

By July, 2014, the board and the OEIG received anonymous letters alleging Baker was skirting procurement policies. The Board’s statement said they worked together with Baker to put the right policies into place.

“Once the Board and [Baker] identified that clarity was needed, both undertook significant policy reforms,” Butler wrote. “In addition to these reforms, NIU administrators took action in 2015 to address improper reimbursements and lodging benefits, and eliminated the affiliate employee classification effective January 1, 2016.”

Baker and the Board chair both wrote that the problems were being identified and solved just as the three-year OEIG investigation was taking place. The board approved a new Whistleblower policy in December, and issued  “counseling” to two female employees in Human Resources. The OEIG report did not recommend any corrective action for Baker, so the university did not ask for any.

But one HR employee, who left the university, alleged that career staff “did put up resistance” to Baker’s directives and “made the best choices possible at the direction of a President who insisted in operating in crisis mode,” an addendum to the report said.

“I take responsibility for the mistakes identified, and I have worked diligently since these issues were brought forward in 2014 to do everything in my power to keep them from happening again,” Baker wrote in his statement. “I look forward to being able to devote my full attention to the issues facing our university and to ensuring that NIU will continue to fulfill its vital mission with an emphasis on preparing students for success after graduation.”

The board statement said the board was satisfied with the steps made to comply with state rules.

“Lastly, while it may not always be appropriate for us to address complaints publicly, we want our community to know that we are informed, engaged and working with the best interests of the university in mind,” the Board Chair wrote.

So, NIU will go forward under Baker’s leadership into the future of the Illinois budget impasse and scarce MAP grants.

Butler wrote of a need to put the matter behind the university to generate success for the students.

“In light of the formidable challenges facing higher education, the State of Illinois, and the University, we are determined to move the institution forward in a sound strategic direction, advance the legacy of success at NIU, and make the thousands of stakeholders proud of the University,” he wrote.

—  NIU President and board: Ethics report is not new information —