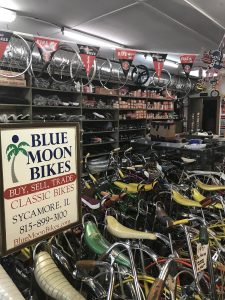 The second floor of the Blue Moon Bikes which has offers some antique Stingrays for sale. (Photo by Kelli Duncan / for Chronicle Media)

Rod Griffis started collecting antique bikes in 1996 when he found an old Whizzer motorbike that he once rode as a kid.

“I grew up on a farm and we still own the farm so [the motorbike] happened to be laying in a barn out there,” he said.

Shortly after, Griffis came in contact with a local collector of Whizzer bikes who helped him fix it up and introduced him and his son to the bike collecting community.

From that day on they were hooked.

But the three-story building is also home to vintage bicycles ranging from a 19th century high wheel model to the stars of the collection — vintage Stingray five-speed Krates with high handle bars and elevated banana seats.

Griffis now has hundreds of bikes from the 1940’s-80’s and even a few dating back to the 1800’s. He said he even bought Cindy Crawford’s childhood bike from her mother around the time that he opened the store.

“As we’ve been in the collecting hobby, I’ve noticed that it’s something like a disease you get once you get into it,” Griffis said. “It’s like you’ve gotten bit by some virus or something that makes you just want to go and buy stuff.”

“Ebay was just kind of starting back then so my son got on ebay and he was buying all these bikes and stuff so I ended up with 200 bikes in my basement,” Griffis said.

Griffis said the idea for the store came when his wife began to get fed up with the space that the bikes were taking up in their home. He said she jokingly told him that something had to go —either her or the bikes.

Rod Griffis, owner of Sycamore’s Blue Moon, started out restoring a bicycle he owned as a child and eventually turned into a collector of vintage bikes. (Photo by Kelli Duncan / for Chronicle Media)

“It was consuming our house so in 2001 I bought this building and then we started the bike shop downstairs so that I would have a place to store my collection,” he said.

Before he bought the store, Griffis said he would occasionally sell bikes out of his garage.

“Back then, people would ask me if I had hours, you know, like regular hours and I said ‘well we’re open every blue moon.’ So that’s how the name for the store came about,” Griffis said.

Another unique item among the collection is a restored Boneshaker high wheel bike from the late 1800’s. Boneshakers have a comically large front wheel with a smaller back wheel and were popular among members of the upper class in the 1880’s, according to Griffis.

Some of the antique bikes are for sale and those are kept on the second floor of the building. But the highlight is the store’s third floor where Griffis keeps most of his collection in what he refers to as his vintage Stingray museum.

Griffis said his favorite model of Schwinn bicycles is the Stingray Krate. His love for the model is evident in his extensive collection of Krates from nearly every year of production beginning in 1968.

“They were modeled after a dragster called the krate,” Griffis said. “So it has a lot of similar elements like the slicks on the tires and the five-speed gear shift.”

Back in the day, Krates were sold for under $100. Today, collectors often pay hundreds or even thousands of dollars for them, according to Griffis.

“More than a bicycle, it’s a piece of art in my opinion,” Griffis said.

According to the Schwinn website, the company was started by a German immigrant named Ignaz Schwinn in Chicago in 1895. 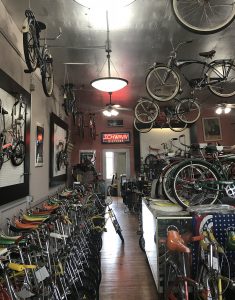 The company was passed down among members of the Schwinn family and enjoyed decades of success in the bike industry. Many Schwinn bikes were manufactured in Chicago before production halted in 1982.
The company went bankrupt in 1992, according to their website. Shortly after, the company was purchased via bankruptcy court by billionaire Sam Zell who moved the company’s headquarters to Colorado.

A onetime host of the fest — a bicycle enthusiast from Milwaukee — died in 2001 so Griffis began hosting it in downtown Sycamore each year to keep the legacy alive.

“We were just starting the store back then and we had a few people from the community suggest that we take over the festival so we did,” Griffis said.

Griffis said this year’s festival celebrated the 50th anniversary of the Krate model. The festival includes a bike contest where participants competed for trophies in a variety of categories including best Schwinn Krate, best original Stingray and best “special interest” bike.

Griffis said they typically have around 40-50 vendors who rent booths at the fest to sell bikes and other items.

“We have people that come from all over, collectors and they’ll bring different bikes and parts,” Griffis said.

In the bike collector community, this is known as a “swap meet” because people often negotiate trades instead of simply paying cash. 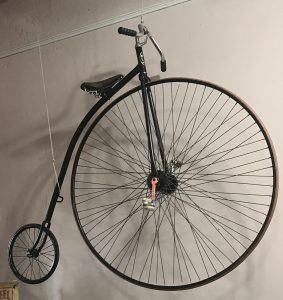 “People will come with bikes and will swap for somebody else’s bicycle and try to figure out what they have that someone else might want and vice versa,” Griffis said.

He said the festival has grown throughout the years with around 400-500 attendees this past June. Griffis said they try to plan the festival to take place on the Saturday before Father’s Day each year.