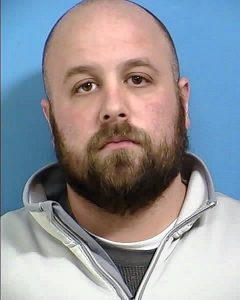 Michael Liedtke, 34, of Streamwood, coerced a 16-year-old Lake County resident to send sexual videos to him, according to an FBI agent.

Liedtke subleased space at DuPage Training Academy in Carol Stream, where he ran a volleyball program and installed a camera in the bathroom at the facility, according to the Federal Bureau of Investigation’s Kassandra Hulliberger. According to the FBI agent, Liedtke said he installed the camera because he wanted to prevent individuals from “vaping” in the bathroom.

Police said upon searching Liedtke’s cellular phone, they found a chain of text messages between Liedtke and the 16-year-old. The minor admitted to texting with Liedtke in a sexual manner, prosecutors said.

The teen allegedly acknowledged meeting Liedtke on an online dating site and that they had never met, but that they had exchanged pictures, videos and mobile numbers.

Liedtke remains in federal custody based on the government’s argument of him “being a danger to the community.”

Liedtke was scheduled to appear Feb. 28 in DuPage County Circuit Court for arraignment on four charges, but did not appear because he is still in federal custody. Liedtke of 704 Parkside Circle in Streamwood, was charged in DuPage with two counts of possession of child pornography and two counts of unauthorized videotaping.

Liedtke’s attorney said that the 10 percent of $250,000 bond that the defendant’s family posted regarding the DuPage charges is causing a hardship for them and asked that the money be returned as Liedtke is going to remain in federal custody for quite some time.

Assistant State’s Attorney Tom Minser argued against returning the bail money, noting that should federal officials release Liedtke he would not have any bond in place for the DuPage charges.

DuPage Circuit Court Judge Brian Telander opted to return the bond money, minus a 10 percent fee, to Lidetke’s family noting that he will be in federal custody for a while.

“The state objects,” Minser said. “To have some sort of bond for the court is warranted.”

Liedtke will be arraigned on the DuPage charges April 4.

On Jan. 21, Carol Stream police responded to a claim of possible unauthorized videotaping at DuPage Training Academy, 115 Alexandria Way. An investigation into the claim revealed a video camera hidden in a ceiling tile in a public bathroom at the location, police said. The wiring of the video camera allegedly led to a computer located in Liedtke’s Xcel Athletics volleyball program office at the facility. An inspection of the computer allegedly revealed numerous images of patrons, including minors, as they used the washroom. It is further alleged that Liedtke also possessed images of child pornography on his cell phone.

“The allegations against Mr. Liedtke are, in a word, sickening,” DuPage County State’s Attorney Robert Berlin said. “He allegedly violated not only the privacy of patrons at the facility, but also the trust placed in him by the parents of the athletes he trained. The disgusting behavior alleged in this case will be met with the full force of the law.”

“My office is dedicated to the safety of our children and any such allegation or even the hint of this type of behavior, will be taken extremely seriously,” Carol Stream Chief of Police Ed Saller said.

Should Liedtke be released from custody, terms of his release include no contact with children under 18 years old, according to federal officials.