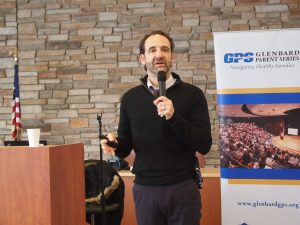 Child and adolescent psychiatrist Jess Shatkin talks to attendees at a Glenbard Parent Series program Nov. 13 at the Marquardt School District 15 Administration Center in Glendale Heights. Shatkin said teens overestimate risk, but still do risky things because of the fear of missing out. (Photo by Kevin Beese/Chronicle Media)

It is the fear of missing out that helps drive teens to making risky decision, according to a child and adolescent psychiatrist.

Jess Shatkin, a professor at the New York University School of Medicine, said even though teens perceive risks at higher percentages than reality dictates, they are more concerned about missing a big moment with peers and that is why they take risks.

Shatkin, author of the book “Born to Be Wild: Why Teens Take Risks, and How We Can Keep Them Safe,” said part of the reason teens think risks are higher than they are is that adults continually bombard them with the consequences of risky behavior. So, teens naturally think the risk of something is greater than it actually is, he said.

“Why do they overestimate risk? Because we keep telling them they’re at risk,” Shatkin said.

The leader of the NYU Child Study Center said adults also expects kids to think like adults when their brains are still developing.

He said that kind of thinking generated programs like Scared Straight, aimed at scaring juvenile offenders onto the right path, and Drug Abuse Resistance Education, aimed at keeping kids from substance abuse.

“They don’t work,” Shatkin said, “and oftentimes, they make things worse … Sex education and drug education in schools is not working. It is making things worse.”

“Ninety-four percent of us believe our work is above average,” the adolescent psychiatrist said. “How can that be?”

With their brains not completely developed, teens are driven by rewards, Shatkin said. Dopamine, which gives feelings of euphoria, and hormones are both at their highest levels in the teen years, he pointed out. 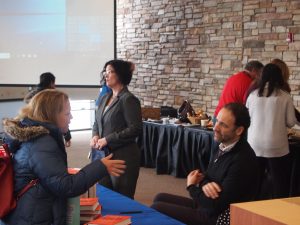 He said the presence of another teen can change a cautious teen driver into the next Mario Andretti. Shatkin said he sees that with his own teenage son behind the wheel.

“If a peer is there or even if they only think a peer is there, it changes things,” Shatkin said. “With peers in the car, teens get in many more crashes. They run more red lights.”

He said all of us remember emotional pain — often more than physical pain — and that is why teens have such a fear of missing out.

“So, teens might take risks to avoid pain,” Shatkin said. “They are designed to do it.”

He said parents can help teens tackle major risks, like having unprotected sex, by breaking the issue down into smaller pieces.

“Ask a teen girl if she was pregnant, would she go to prom, would she stay in school,” Shatkin advised.

Too often, we have all-or-nothing rules for teens and young adults, Statkin said, referring to drinking, specifically.

“We should have a whole program on teaching teens to drink. Drinking comes more naturally in other countries,” he said. “Why not let kids be able to have one drink — legally — at 19 and two drinks at 20?”

He said that authoritarian parents — those who set limits and consequences for actions — wind up with more successful kids overall.

Shatkin said research shows that just being there for teens pays huge dividends.

“Just showing up makes them much more likely to talk to you about risks,” he said.

Shatkin said family dinners are a good time for everyone to put their phones away and talk about what is going on their lives.

He said for parents who do give a phone to a child, monitoring software like Life 360 is a must.

“You own the phone, monitor it,” Shatkin said.

Jennifer Weiner, an Aurora parent, said she went to the Glenbard Parent Series program held in Glendale Heights, for information on dealing with teens.

“You always can improve your parenting skills,” Weiner said.

Weiner, who serves as a youth group adviser for her synagogue, said she knows of four youth, including her son, who struggle with depression and anxiety issues.  One girl in the group recently approached Weiner and said she was cutting herself.

“Any help you can get is good,” Weiner said of attending the GPS program. “It is always good to hear other ideas.”