An late April storm that left snow scattered across Colorado, Kansas, and Nebraska is being blamed for producing seemingly endless periods of heavy rainfall across Illinois that resulted in localized flooding recently.

With rainfall totaling 4 to 5 ½ inches in the final few days of the month, this April ranked as the ninth wettest since 1871 with a total of nearly 6.5 inches of rain falling.

The highest totals were found in Minooka where the latest storm produced 5.42 inches of rain and in central LaSalle County that recorded 5.34 inches of rain.

With four inches of raining falling on west suburban Naperville, portions of the city’s Riverwalk were closed early last week after water from the West Branch of the DuPage River crested over onto the adjacent sidewalk.

The river also encroached on the City of Naperville Municipal Center grounds and continued to do so late last week, according to Linda L. LaCloche, Communications Manager with Naperville’s City Manager’s Office.

In addition, early last week “a few roads were closed due to flooding–Julian St just north of Prairie St and 8th Ave between Sleight and Wright,” she added. 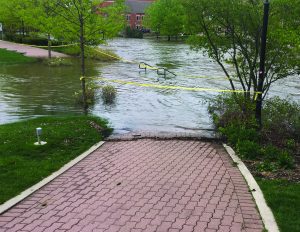 Portions of the Naperville’s Riverwalk were closed early last week

However, by mid-week all flood control had ceased operations as local rivers had receded.

With all three facilities on Salt Creek in operation, Salt Creek did not come out of bank, Mitros said.

The heavy rains also contributed to a flood warning for the Fox River, according to the National Weather Service.

Todd Hoppenstedt Public Works Director with the Village of Montgomery said, “We kind of dodged a bullet this time. We had some very heavy concerns Sunday into Monday with river water within inches of people’s foundations.”

However, “thankfully, it started to recede rather quickly,” he added.

“If we would have had another half-inch of rain,” Hoppenstedt said, “we may have had some properties impacted.”

At its highest level, the Fox River reached 13.75 feet.

Hoppenstedt said, “Over the past week, the river has fallen about 9 inches which is significant.”

At about 13 feet late last week, the Fox River is considered to be in the “minor flooding stage,” he added.

With no significant rain in the upcoming forecast the river should subside.

“At this point we have had so many dry days, a half inch of rain wouldn’t tip the scale, Hoppenstedt said.

— Some flooding in western suburbs but most handled excessive rainfall —