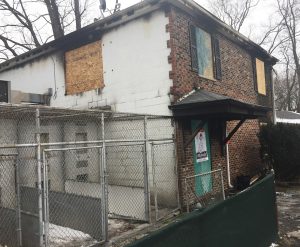 The two-story home of Bully Life Animal Services in West Chicago is boarded up following an early morning fire on Monday, Jan. 14 that claimed the lives of more than 30 dogs. (Photo by Jack McCarthy / Chronicle Media)

Friends and supporters have stepped up to help the owner/operator of a West Chicago kennel in the wake of a devastating blaze that destroyed the facility and killed as many as 31 dogs.

A GoFund Me effort to help Bully Life Animal Services owner/operator Garrett Mercado had raised more than $65,000 of a $100,000 goal as of early Wednesday, Jan. 16. A separate GoFundMe effort has collected $22,400.

Mercado had blisters and burns on his hands — “every finger,” he said — from attempts to rescue dogs after a fire broke out at the West Chicago kennel early on Monday, Jan. 14.

Mercado and a DuPage County sheriff’s deputy were able to help free around 25 dogs quartered at the kennel, formerly known as D & D Kennels and located near the northeast corner of County Farm Road and North Avenue.

But as many as 31 other dogs perished — including four of Mercado’s own — in the early-morning blaze. Mercado, who lived in an apartment in the facility, also lost his home. 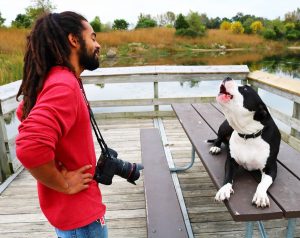 Garrett Mercado, owner/operator of Bully Life Animal Services, is shown in a photo from his Facebook page. (Facebook photo)

“Garrett is an absolutely amazing patient, respectful trainer with using positive reinforcement training we have had four or five dogs from our rescue go through his training and come out phenomenal,” wrote one Facebook reviewer.

According to reports, the fire started on the second floor and was spotted by DuPage County Sheriff’s Deputy Chris Obrochta. He called for assistance and entered the burning building with  Mercado to try to free trapped dogs.

Firefighters battled the blaze for five hours. The cause remains under investigation.