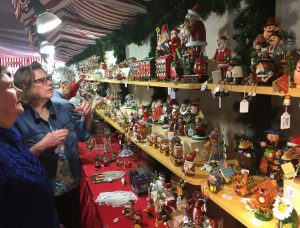 The village square at Naper Settlement has once again been transformed into a traditional German holiday market.

Christkindlmarket, operated by German American Events, is under way for the second straight year at the downtown Naperville attraction and runs through Christmas Eve.

Christkindlmarkets date back to 15th century Germany when people gathered during the winter months to purchase goods, food, and beverages.

The tradition still stands today at Naper Settlement where more than 40 vendors are on hand selling goods such as beer steins, glasses, nesting dolls, and hand-crafted ornaments  while other venders offer beverages like hot cocoa and mulled wine or traditional Bavarian food and sweet treats.

Last year, more than 200,000 visitors descended upon Naper Settlement to enjoy the event.

“We have 13 new vendors in Naperville this year,” said Kate Bleeker of German American Events.  “We are much larger than last year.  We have more room inside the warming tents and more food vendors.  We are also featuring new vendors in our popup vendor booths—where vendors will alternate every few days, so that when people come there will be something new for them to see.”

In its first weekend open “about 18,000 people came through each day which is similar to last year,” Bleeker said.

“(But) with the redesign of the market and repositioning of the food vendors, the lines are in much more control and there wasn’t any traffic jams like there were last year.”

Other holiday events in Naperville include the sixth annual performance of Handel’s Messiah at St. Peter and Paul Church.

Performed by the Saints Peter and Paul Orchestra and Choir along with the Choir of St. Raphael Church, the concert will be held Dec. 15 at 7 p.m. at the church.  Tickets range from $10 for students to $30 with a reception following.

Built in the 1920s, the church is “awe-inspiring,” according to Matthew S. Sprinkle, Director, Sacred Music Department of Sts. Peter and Paul Church. “The church is simply beautiful and when it is decorated for Christmas it looks like a cathedral,” he added.

The concert features the Christmas portion and Hallelujah chorus from Handel’s Messiah and a caroling sing-along.

“The church seats 800 and we usually sell out,” Sprinkle said. “We start working on this concert in September,” he said. “We have thousands of man hours that go into this event.”

On Dec. 7 from 5 p.m. to 8 p.m., Naperville store front windows become the stage for scenes from iconic Christmas classics.

Kandiss Hernandez, with Center Stage Players said, “We will be in 10 windows.”

This is a great training ground for the young actors who can’t break character and must be highly animated behind very thick glass, she added.  “It brings the downtown  area alive.”

But the fun doesn’t stop there.  On New Year’s Eve, the group puts on a production of a 1950s themed, Zombie Prom.

Billed as a family fun event, the evening begins with a 4 p.m. show followed by dinner and dancing at the Embassy Suites in Naperville.

For more than 20 years, Naperville Trolley has been taking holiday light enthusiasts around town  highlighting homes that go the extra effort to spread holiday cheer.

They offer private tours—although, most are already sold out, but some public tour options include a north Naperville tour, a south Naperville tour, or a 2.5-hour combination tour is available.  Cost for a one hour tour is $18 and $36 for the 2.5-hour tour

No holiday would be complete without a visit to Jolly old St. Nick.  Visitors are welcome at Santa’s house on the Naperville Riverwalk at Jackson Avenue and Webster Street. Admission is free. Photos can be purchased for $8 each or two for $15.