Yuletide Festival, new this year to Naper Settlement, launched in December as a holiday season option for making merry.

Yuletide Festival, “is the place to be to celebrate the holidays,” said Jessie Burdett, event manager for Star Events, festival organizer.

Finding a home at Naper Settlement for 2019, the new winter festival takes place on December weekends in a location previously hosted a Christkindlmarket. 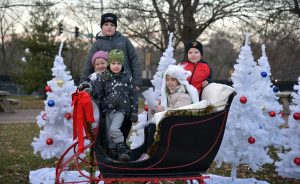 Christkindlmarket organizers announced last spring they would no longer would bring their German holiday market to Naper Settlement after a three-year run.

Parking and retail competition among downtown merchants are said to have been concerns as the former market which had attracted large visitor turnouts.

The Naperville Christkindlmarket had been operated by contractor German American Events, LLC., which produces markets in downtown Chicago and Wrigleyville this year.

“We thought we’d come back this year for the new market,” said Gerry Prendergast of Oak Lawn, who had visited Naperville’s Christkindlmarket and wanted to experience the Naper Settlement historic setting for 2019.

“We’re getting pretzels, we’re getting funnel cakes, we bought ornaments. It’s a beautiful day,” Prendergast said. “It’s a fun place to come to and it’s local.”

On Friday, Dec. 13, it was 46 degrees with blue skies when Yuletide Festival opened for its second season three-day weekend. 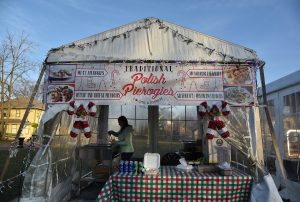 One of the food vendors at the Yuletide Festival specialized in traditional Polish favorites. (Photo by Karie Angell Luc/for Chronicle Media)

Other attractions include holiday lights, an outdoor fire pit seating areas and photo opportunity sleighs plus other backdrops, like an illuminated gazebo.

“We are making memories, we came out to see what this was all about,” said Angela Eilermann of Montgomery, who brought her children Evan, 5, a preschooler, Liam, 8, a third-grader and William, 10, a fourth-grader.

“It’s a good start and hopefully they can build up more and more, and get more vendors, it will be great,” said Eilermann, who added she attended past Christkindlmarkets here. “It looks great so far, it looks good.”

The Eilermanns accompanied Diane Whipple of North Aurora and her children Emma Whipple, 6, a kindergartner and Lily Whipple, 8, a second-grader.

Diane Whipple hoped for her children at the holiday season would be, “to just have a great time. They’re enjoying it,” she said. 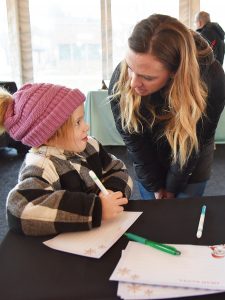 Letters to Santa Claus were filled out on site and placed in a red mailbox to the North Pole.

“We have customers come year after year, they add to their collection,” Sullivan said, of her clients who follow Viktoria Anna. Some of Viktoria Anna’s ornament designs include Cloud Gate, also known as The Bean.

The bean shaped sculpture, found at Millennium Park in Chicago, is part of the inventory of delicate glass ornament art she sells.

“It’s nice for us to be here because our customers are seeking us out here,” Sullivan said. “We enjoy being a part of the festival.  I hope next year it grows a lot more.”