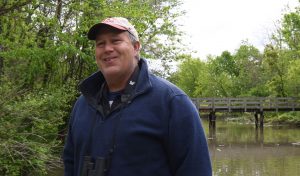 Joe Devine of Naperville has some tips for bird-watchers hoping to spot rare and unusual species: keep the sun to your back, learn to identify bird calls and don’t stop for lunch.

Devine, who has been studying birds since he was a child growing up in Orland Park, has launched a “Big Year” birding quest to see as many birds as possible in Will County.

Devine shared his “Big Year” plans on a chilly May morning at McKinley Woods – Frederick’s Grove in Channahon. He parked his pickup truck in the lower lot, pulled on a navy blue sweatshirt and headed down the path that is sandwiched between the I&M Canal and Des Plaines River.

He walked only a few steps before he was inundated with bird sightings. Using binoculars, he quickly spotted black-and-white, Canada and blackpoll warblers; red-eyed vireos; an Eastern wood-pewee; scarlet tanagers; and Baltimore orioles.

A “Big Year” is a big deal in bird-watching circles. During a “Big Year” birders list all of the species they see within a defined geographic area in one year. So far, Devine said he’s up to 173 species for Will County. He said he should be further along, but life and nature can thwart the best laid plans.

“I was hoping to get into my shorebirds before the warblers,” he said. “ … The shorebirds didn’t show up this year. So I’m woefully behind in shorebirds.”

The rarest bird he has seen was the black-legged kittiwake that was spotted in January at Whalon Lake. “For Will County, that’s a really good bird,” he said.

He has also spotted peregrine falcons and a Bonaparte’s gull. And Devine has some favorite species that he enjoys seeing over and over again.

“Scarlet tanager, it just never gets old looking at those no matter how many you see and they’re not common. The red is just such a beautiful red. And bluebirds, I stop to look at bluebirds all the time,” he said.

One bird makes him nostalgic because he can still remember seeing it for the first time as a kid.

“It was a foggy day and this Cooper’s hawk comes flying out of the fog and chases a robin … . You think back to those times when DDT had decimated all of the predators. And that was the first Cooper’s hawk I’d seen. And now I’ll probably see three in my back yard today. It’s just nice to see how they’ve recovered.”

But there also are “nemesis birds” that Devine said he just can’t find. “For Will County one of my nemesis birds is a purple finch. It’s not common, but it’s not rare. And I just cannot see one – ever. I’ve looked, I’ve made five or six trips and I still haven’t.”

Another nemesis bird is a white-rumped sandpiper. And there is a bird that escaped his binoculars because of an ill-timed stop for fast food.

“There was a Hudsonian gotwit on the east side (of Will County) … and I went out to see it. And, of course, I was hungry, so I stopped at McDonald’s on the way there.”

By the time he arrived, a fellow bird-watcher gave him the bad news: ‘”Oh, you just missed it. It left 10 minutes ago,'” Devine said the woman told him. “If I would have just waited to eat … I would have picked that one up.”

Devine has been studying birds since he first spied them at his mother’s bird feeders.

“My mom was into it, but she didn’t know what anything was,” he said. “So I was kind of her go-to field guide when I was little.”

He also learned about ducks from a neighbor who carved decoys. “He also hunted and always stressed the importance of being able to identify the different ducks,” he said. “I lived a short walk from McGinnis Slough in Orland Park, so I had ample opportunities to practice.”

While he earned a degree as a wildlife ecologist and worked on some nature projects, including studies of Kirtland’s warblers in Michigan and ocelots in Texas, he eventually settled on a career in construction and now owns his own remodeling business. But bird-watching is still his main connection to nature and one that he loves.

Since he’s lived in Naperville for 20 years, Devine said it was time to focus on Will County for his “Big Year” challenge. He has been to around a dozen preserves so far, including some he had never heard of previously such as Kankakee Sands Preserve, Goodenow Grove Nature Preserve and Thorn Creek Woods Nature Preserve.

There are smaller preserves Devine said that he also never noticed. “But now that I’m looking for (birds) in Will County, it’s a whole different thing.”

He’s also learning that some birds, such as the Caroline wren, are easier to spot in southern Will County preserves than up north closer to his home in Naperville. And the “big water” area near McKinley Woods attracts diver ducks.

“For the migrating birds, a lot of times the rivers will act like a funnel,” he said.

Devine’s bird-watching technique is to hit a preserve on his day off, hike a bit and then listen.

“I’m not to the level that some of these people are who know every bird they hear call,” he said. “But I am good enough to know that if I hear something different or unusual, I’ll go find it.”

He also has learned a lot from the website, ebird.com, the Illinois Birding Network and the Sibley Field Guide to Birds.

While some birders can be ornery and don’t want other birders getting near their birds or camera shots, most are really helpful, Devine said.

One tip Devine picked up through the years is to go birding after strong southern winds move through an area at night.

“In spring, if you have a couple of nights of southern winds, you know that it is going to pile up birds around here,” he said. “They’re going to migrate in and you’re going to have a better chance of seeing things.”

He also always keeps the sun at his back so he can more clearly see the brilliant colors and unusual markings on many of his avian finds.

Devine said he only recently started keeping lists of the birds he sees, and his desire to do so was sparked by social media, which he was slow to embrace. Once he joined Facebook a few years ago and saw all of the birding groups and the photos posted by members, he was inspired to do more.

“So I’ve started listing and I’ve started to do Illinois and my life list,” he said. “ … It keeps you focused.”

Three-hundred is a number people try to get to for Illinois, and Devine said he’s achieved that.

While birding nudged him onto social media and it has given him a reason to get outside and search for “what’s around the corner,” there is one benefit that truly makes all of the bird-watching worthwhile.

“This is my peaceful place,” he said as he stood in McKinley Woods surrounded by bird calls. “This is where I just come to relax. I don’t worry about anything. This is probably where I am the happiest. … There is an overall calm and peacefulness that comes about.”

Article from the Will County Forest Preserve District and written by Cindy Cain. Reprinted with permission.