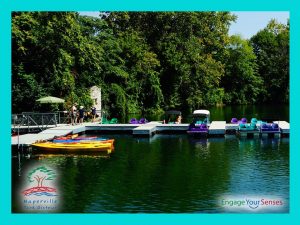 Paddle boats at the Quarry is one of the facilities the Park District plans to reopen to the public on June 1. (Photo courtesy of Naperville Park District)

The Naperville Park District plans to reopen facilities and restore programs while calling back staffers starting on June 1.

The park district board also voted on May 14 to pursue legal action to determine that it may make decisions about the District’s essential functions, including programs and the use of property, independently of specific dictates in the Gov. J.B. Pritzker’s Executive Order.

“As a local unit of government, the Park District’s operations are recognized as essential under the Governor’s Executive Order and the District is vested with the statutory power over the District’s properties and programs,” board President Rich Janor said in a statement.

“An important part of being healthy includes staying active and that includes being able to use some of the outdoor amenities and operate some of the programs that the District provides.  The Governor’s Executive Order improperly interferes with the Board’s ability to make those decisions,” Janor added.

Pritzker responded at his COVID-19 briefing the next day.

“All I can say is that they should be following the data and the science here and not their guts,” he said. “I too would like to allow all children — my own included — to participate in summer (activities). I hope we’ll be able to do that soon enough as we move through the phases of the plan and the Restore Illinois plan.”

“I realized that the the local officials there are going to do whatever it is that they want to do but I wish they would show some leadership,” he added.

The Board also announced that the Park District will reopen additional facilities and programs beginning June 1 while transitioning staff that been working remotely back to in-office work.

Facilities that will reopen to public use on June 1 include: Paddleboats at the Quarry, disc golf at Knoch Knolls Park, skate parks, sport courts and parking lots.

Basketball rims will be installed beginning June 1 and will open sometime that week as staff completes the reinstallation work. These facilities will join the District’s already reopened golf courses, tennis and pickleball courts, and the Ron Ory Community Garden Plots.

Also, the third annual 95th Street Farmers Market will open for the season on Thursday, June 4.