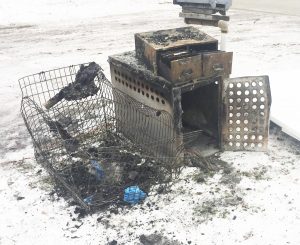 Damaged and smoke-covered cages are stacked outside K & D Kennel last January after 29 dogs died in a blaze at the West Chicago facility. (Photo by Jack McCarthy / Chronicle Media)

The operator of a West Chicago kennel where 29 dogs died in a January fire faces multiple misdemeanor charges stemming from the blaze.

Garrett Mercado, 29, was charged by DuPage County officials on July 10 with 14 counts of Animal Cruelty, a Class A Misdemeanor, and 14 counts of Violation of Owner’s Duties, a Class B Misdemeanor.

Mercado, 29, of Woodridge, was taken into custody after charges were filed and released on July 11 after posting $5,000 bail.

Mercado operated the former D and D Kennel, 2N441 N. County Farm Road which went up in flames on Jan. 14.

An investigation into the fire conducted by the DuPage County Fire Investigative Task Force found the cause of the fire that killed 29 dogs to be undetermined. But it also revealed that numerous other dogs were mistreated suffering puncture wounds, lacerations, abrasions, weight loss, muscle wasting and dehydration.

It is also alleged that there was a foul odor throughout the facility and that urine stains, fresh and old feces and empty water bowls were found in the kennel. It is further alleged that the kennel runs were not sanitary and that dogs were kept in cages stacked upon one another.

It is alleged that dogs were placed in cages or crates too small for them, dogs were inappropriately tethered and that one dog was tethered to a bar in a bathtub in a fashion that would restrict or prevent movement.

Investigators charged that Mercado abandoned the dogs at which time a fire erupted resulting in the dogs’ deaths.

“What happened in the early morning hours of Jan. 14 is heart-breaking,” DuPage State’s Attorney Robert Berlin said. “It is alleged that (his) disregard for the health and safety of nearly 60 dogs in his care resulted in the death of 29 of those dogs when a fire engulfed the D and D Kennel.”

DuPage County Sheriff James Mendrick called on the public to advocate for for animals who are abused or neglected.

“I’m truly saddened to see any dogs be treated in this manner,” Mendrick said. “Many times, animals have no advocates. They can’t report a crime committed against them or tell someone that they’re being mistreated. That’s why it’s so important for public safety to step up as the guardian for those pets and animals that are being abused or neglected.”

Mercado’s next court appearance is scheduled for Aug. 12 in front of Judge Brian Jacobs.