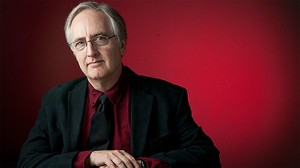 Author and COD faculty member Raymond Benson will have a script based on his “Black Stiletto” novels picked up as a possible ABC-TV pilot. (Photo by Lloyd DeGrane)

ABC Studios is picking up a drama script based upon the acclaimed “Black Stiletto” novels by College of DuPage adjunct faculty member Raymond Benson.

The script is being developed by actress Mila Kunis’ Orchard Farm Productions and written by Javier Grillo-Marxuach, an Emmy winner for the popular TV series “Lost.” This winter, ABC will select scripts to be made as pilots and in the spring will select pilots to produce as series.

For Benson, a film history teacher at COD and the first American writer of James Bond novels, it’s an exciting and surprising development.

“Just getting to this first step is amazing,” he said. “I’ve been doing this for 35 years, and I’ve had my work optioned before but nothing ever happened. I kept hoping someday that it would. With luck, this script will make it through.”

The “Black Stiletto” series consists of five books, which Benson describes as one big novel divided into five sections. The plot is told through parallel stories – of a man in the Chicago suburbs discovering a dark secret about his ailing mother, and of his mother decades earlier becoming a modern-day hero.

“In the late 2000s, the superhero movie trend took off, and I wanted to create a character that would appeal to women,” he said.

After the second book was published in 2012, Benson met Tony Eldridge of Lonetree Entertainment. Eldridge read the first book and secured a right to shop option, which gave him exclusive rights to find a producer to move the project forward. After renewing the option, Eldridge teamed with producer Nancy Moonves and eventually met with Kunis, who was searching for a property that would become her production company’s first foray into television. Kunis loved “Black Stiletto” and ABC moved on the script.

“Black Stiletto” is one of many successful projects for Benson, who developed a love for movies as a child in west Texas. He attended the high school that became the basis for “Friday Night Lights” but was not into football. Instead, he would go to the public library and read the movie section in the New York Times.

He majored in theater at the University of Texas at Austin and worked in New York City as a director off-Broadway and off-off-Broadway. But movies changed his life: seeing the James Bond film “Goldfinger” and “2001: A Space Odyssey” upon their releases and discovering foreign films like “The Seventh Seal” during his college years.

During the 1980s, several friends discussed what kind of books they would write, and Benson replied that he wanted to create a coffee-table anthology of James Bond that included a history of all Bond books and films. In 1984, he published the successful “The James Bond Bedside Companion,” and a decade later, he wrote James Bond novels for seven years, three of which were novelizations from the Pierce Brosnan Bond films.

Benson also worked in the computer gaming business, where he honed his fiction skills and created stories that solved puzzles.

Although he’s hopeful about the “Black Stiletto” deal, Benson also understands the realities of the entertainment business.

“You can’t live by the option. I learned a long time ago that you just keep moving forward until you get the call,” he said. “With Mila Kunis and Javier Grillo-Marxuach working on this project, I think it has a good chance to succeed.”