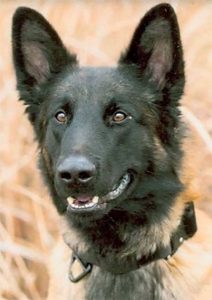 Give Kato, an Aurora Police Department canine, an assist in an arrest last week.

A 27-year-old West Chicago man faces felony charges following a May 2 incident on the Near South East Side that ended when an APD police K-9 located him hiding under a bed inside of a home he had run into and bit him in the ankle.

Guillermo M. Velazquez, of the 500 block of Kimball St., is charged with two counts of aggravated battery to a police officer and a single count of criminal trespass to a residence — all felonies — after he was found to be driving a stolen vehicle near Ashland and Fifth around 7:30 a.m.

After confirming the vehicle was stolen earlier in the morning in unincorporated Aurora, the officer who spotted the vehicle approached it and ordered Velazquez, the lone occupant, to exit.

When the officer attempted to take him into custody, Velazquez resisted arrest and fought. He was able to pull away from the officer and ran northbound on Fifth, then westbound to the 900 block of Lafayette St.

Velazquez ended up running into a random home in that block and tried to hide under a bed. The owner and only occupant of the home, a 30-year-old Aurora man, ran out of the house when Velazquez entered.

Numerous officers, including K-9 Kato and his handler, converged on the home and warned Velazquez multiple times to surrender or the dog would be released.

Velazquez ignored the commands and as promised, Kato was released into the second story bedroom. The dog immediately found Velazquez under a bed and bit him. The officers then took him into custody even though he was continuing to resist. As they were walking Velazquez down the stairs, he kicked one of the officers who was on a lower stair in the chest.

Aurora Fire Department Paramedics took Velazquez to an Aurora hospital where he was treated and released. The officers did not require medical treatment.

The Kane County Sheriff’s Office was also involved in the investigation which also resulted in three counts of resisting police.