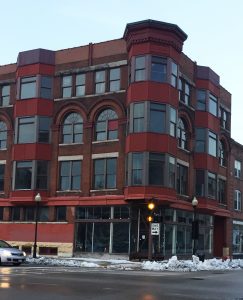 Hobbs Building, which is temporarily missing its landmark onion dome, is one of the targeted buildings as part of the downtown Aurora development plan.

No new big ticket projects are planned for the near future in downtown Aurora.

Instead, a strategy of smaller scale redevelopments may set the stage for what officials hope will become a busier, more vibrant city center.

They highlighted the next planned rounds of redevelopment in the state’s second-largest city. Both are focused on converting older structures into a mixture of residential, retail and restaurants.

“If you look around, there are some projects that have been sitting vacant in this city for God knows how long,” said David Dibo, Aurora economic development officer, at the public forum. “Our idea is to try to make something happen with those projects … and jump start development.”

A top initial target is the former Terminal building on North Broadway. Rockford-based Urban Equity Properties, which has helped spark a downtown revival in that city, recently purchased the one-time office building.

Also in play is the Aurora National Bank building across the street; the vintage Hobbs Building, noted for its (temporarily removed) onion dome; and the vacated School District 129 building on South River Street. 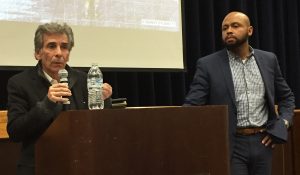 Downtown is defined as a compact area extending from two to five blocks from the east and west banks of the Fox River and running from around Illinois Avenue south to North Avenue. It features two main north-south corridors, Illinois Routes 31 and 25.

The Nov. 28 meeting was the latest in a series of discussions following there 2015 release of a downtown master plan, created with help from the Chicago Metropolitan Agency for Planning (CMAP).

Aurora’s population has boomed in recent decades and now tops 200,000. But the growth has occurred on the edges of a city that extends from southeast Kane into DuPage, Kendall and Will counties.

Still, the city tried to bolster downtown with a series of major projects and attractions designed to draw visitors, students and commuters.

They include the Hollywood Casino complex; conversion of a railroad roundhouse into a dining and entertainment destination; revival of the Paramount Theater as a center for live musicals and theater; a new downtown Waubonsee Community College campus; a new public library; and RiverEdge Park’s recreational space and outdoor performance venue along the Fox River. 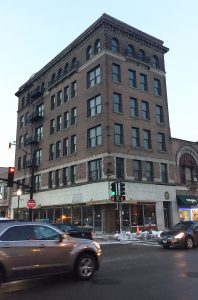 The Terminal Building, original a hotel and later an office building, is a target for conversion to housing and a restaurant.

But the high volume of traffic that accompanies each essentially passes through.

“If the residential works, then the commercial can be supported,” Dibo said. “The other thing that the city needs is, if you’re going to do a restaurant, it’s got to be special. It’s got to be something that people will make it their business to go to.”

More residents would also make it attractive for developers to start filling in empty downtown spaces with new construction.

Residential growth is slowly occurring with the conversion of some former industrial, office and fraternal organization buildings, plus construction of the River Street condominiums.