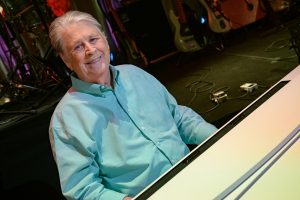 Brian Wilson, the main creative force behind some of the most cherished recordings in rock history, will present Pet Sounds: The Final Performance, on Sunday, June 23 at the Thomas J. Weisner RiverEdge Park in downtown Aurora.

Tickets are now on sale for the performance, with special guests original Beach Boy Al Jardine and Blondie Chaplin.

The Wilson show is part of five live music events announced recently for the riverfront venue.

More shows at RiverEdge, managed by the Aurora Civic Center Authority, are expected to be announced at a later date.

Wilson, who has been called the Mozart of Rock, the Gershwin of his generation, began his career as a teenaged founding member of The Beach Boys, who signed with Capitol Records in July 1962 and released their first album, Surfin’ Safari, that same year.

The band’s initial surf-rock focus was soon broadened to include other themes. Wilson’s innovative vocal and instrumental arrangements for major hits including “I Get Around,” “California Girls,” “Wouldn’t It Be Nice,” “God Only Knows,” and the No. 1 smash “Good Vibrations” made The Beach Boys America’s preeminent band of the 1960s.

In 1965, with The Beach Boys out on tour, Wilson began session work on some of the most deeply personal recordings of his career. Inspired by The Beatles “Rubber Soul”, he challenged himself to create an immaculate musical masterpiece. A vast departure from the band’s then commercial sound, the resulting concept album “Pet Sounds” achieved great critical success helping usher in a new musical landscape.

Wilson has also achieved great solo success with 11 of his own albums released to date, including his acclaimed 2004 completion of an album he first began recording in the ‘60s, Brian Wilson Presents… SMiLE. T