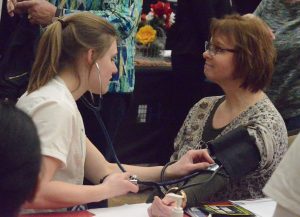 The alarming image and message asks children to commit harmful acts inside the home, Hain said in a Facebook post and news release.

“We’ll be holding some upcoming presentations on this and other dangers within our school districts,” he said.

To keep an eye on your childrens’ electronic data, the Sheriff’s Office recommends visiting the Be Sure Consulting website at besureconsulting.com/monitoringsoftware.

The Momo challenge is an internet hoax that nevertheless caused tons of parental stress and responses from Kim Kardashian and YouTube, according to the parenting website Fatherly.

According to multiple media sources posted last week, the artist whose sculpture inspired the Internet hoax says the original sculpture has been destroyed.

That doesn’t mitigate the concerns of parents, in part because this scam seems to have many lives and iterations.

March has arrived and warmer weather is right around the corner – which means Saturday morning shopping at the farmers market can’t be far off.

The 107th season of the Aurora Farmers Market will open with some of the area’s favorite farmers and vendors at a new, more convenient location in downtown Aurora. This season, the market is going “Back to Our Roots” in the heart of downtown where it began more than a century ago.

The new location – directly across from City Hall and Water Street Mall – at 65 Water Street provides ample space for visitors to shop, nearby on street and deck parking and easy access to downtown restaurants, stores, museums and the library.

“We are so excited about returning to our roots and bringing the Aurora Farmers Market back into the heart of downtown,” said Farmers Market Manager Karla Thomas. “Our new location in the recently redesigned surface lot across from City Hall is an ideal setting for our vendors and visitors of the market. There are so many amazing things do in downtown and now patrons can easily expand their trip to the farmers market into a full Saturday experience for the family.”

The Saturday morning downtown market will operate every Saturday beginning June 8 through Oct. 12 from 8 a.m. to noon.

The Aurora Farmers Market Midweek Market will begin on Wednesday afternoons in July at West Plaza. Additional information on times, vendors and special activities will be released soon.

Kane County’s 2018 Officer of the Year might not possess the size and strength of Superman or cosmic powers of Captain Marvel, but St. Charles Police Officer Jennifer Larsen is a superhero in anyone’s book, recognized for saving the life of a baby in 2018 when responding to a 9-1-1 call for help.

Larsen was presented with the Kane County Louis Spuhler Award for outstanding police work in 2018. She accepted the award last month at Annual Kane County Officer of the Year banquet hosted by Batavia Moose Lodge 682 and the Kane County Chiefs of Police Association at Pheasant Run Resort.

She was chosen from a long list of nominees from departments throughout Kane County and nominated by St. Charles Police Chief James Keegan.

On May 7, 2018, Larsen was dispatched to assist an ambulance with a possible cardiac arrest patient. When she arrived, she met the father, who was carrying an infant victim. The father said he discovered the baby had fallen off the bed.

The adult watching the child was unaware the fall had occurred. A combination of circumstances led to the child not being discovered for almost 20 minutes.

Due to the angle that the child’s head came to rest between the bed and wall, breathing became restricted. By the time the father discovered the child, she was blue and not breathing.

Larsen took control of the situation and immediately assessed the child’s condition. She applied a sternum rub without any response from the child.

She was unable to locate a pulse and initiated chest compressions. The infant physically reacted and her pulse was restored.

The Illinois Department of Public Health is warning residents of a measles exposure at Chicago Midway Airport and Northwestern Medicine Delnor Hospital in Geneva.

According to an IDPH news release shared by the Kane County Health Department, an Illinois resident whose flight arrived Friday, Feb. 22 in Concourse B at Chicago Midway Airport has now been confirmed with a diagnosis of measles.

“The passenger was unvaccinated and infectious on that day,” the release said. “IDPH, along with local health departments, is investigating this isolated case.”

The person then went to the emergency room at Northwestern Medicine Delnor Hospital on Sunday, Feb. 24, which may have exposed additional people in the ER.

“These are the only known public locations in Illinois where exposures occurred,” the IDPH said.

New efforts include a Neighborhood Public Art Grants and Utility Box Wrapping, both included in the Public Art Plan approved by city council in June 2017.

Utility Box Wrapping Program—The Utility Box Wrapping Program is available for artists to have their artwork printed onto vinyl and applied to traffic signal and other utility boxes located in downtown Elgin. Utility box wrapping is a program in place in several cities across the world.  The ECAC intends to wrap two boxes this year; staff has identified nine boxes that are possible locations in downtown Elgin. The ECAC will vote on the first box to wrap at the April 8 meeting with the second box being determined at the Aug. 12 meeting.

It may not feel like it, but winter is over

Although it may not seem like spring, the first week of March does mark the end of the meteorological winter season, which runs from December-February.

Despite what felt like an eternity of below average temperatures, the season as a whole finished with temperatures relatively close to the long term average. A few localities in the west-central and northwest portions of the state saw temperature departures of 1 degrees or more below average.

On the opposite end, locations in southern Illinois experienced temperature departures of 1-2 degrees above average during the 2018-19 winter season.