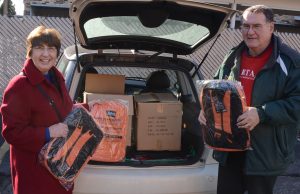 A 44-year-old Kane County deputy was charged last with the use and possession of cocaine.

Sgt. Aaron Feiza, 44, is charged by Kane County State’s Attorney Joe McMahon in a one-count indictment with unlawful possession of a controlled substance, a Class 4 felony.

The indictment states that on Feb. 10, Feiza was unlawfully in possession of cocaine.

If convicted, Feiza faces a sentence of between 1 and 3 years’ imprisonment in the Illinois Department of Corrections, or probation.

According to the Kane County Sheriff Ron Hain, Feiza has worked for the office since January 7, 2004.

“When the Illinois State Police notified my office in August that it was investigating these allegations against Sgt. Feiza, I immediately placed him on paid administrative leave pending the outcome of the investigation,” Hain said in a statement. “The community expects, as I expect, that law-enforcement officers will obey the law. If police fail to meet that expectation, we are obligated to respond accordingly to maintain the public’s trust.

A 14-year-old female girl was shot and hospitalized in an Dec. 3, the unintended victim of a drive-by shooting outside Lowrie Elementary School.

At approximately 4 p.m., Elgin police received multiple calls of shots fired near the intersection of Washburn and Billings Streets. Upon arrival police determined that shots were fired from at least one vehicle towards another nearby vehicle.

Shortly thereafter, a 14-year-old juvenile shooting victim was located in a vehicle at the intersection of Highland Ave. and State St. and subsequently was transported to an area hospital with serious injuries. An adult male that was in the vehicle with her was said to be cooperating with investigators.

Police said later that the victim was still receiving medical treatment and is in serious but stable condition.

The preliminary investigation indicates the victim was not the intended target and the shooting does not appear to be a random act. Detectives from the Special Investigations Group are investigating the incident. If anyone has any information that may assist, call  847-289-2528 or send an anonymous text to 847411 and include ElginPD.

The Geneva Flag at City Hall has been lowered in memory of former firefighter John Schultz and former Alderman Robert Langeness.

Mr. Schultz, 49, of Geneva, died Dec. 1. He served as a firefighter for the Village of Downers Grove and was a paid-on-call firefighter with the City of Geneva for more than 20 years. His obituary can be found online.

Mr. Langeness, 79, also passed away Dec. 1. He served three terms as a fifth ward alderman on the Geneva City Council from 1977-89. Mr. Langeness was an active community volunteer serving on many boards and local Geneva organizations.

Inaugural poet laureate has ‘already been doing the work’

The co-founder of A-Town Poetics will now serve as the poetic voice of the state’s second largest city.

“When you look at Karen’s history and impact on our community, it is evident she has already been doing the work of a poet laureate for many years,” said Irvin.

A retired urban planner and executive with the City of Aurora, Fullett-Christensen has written several collections of poetry and creative non-fiction. She has completed 16 self-published manuscripts and is currently working on her 17th body of work, many of which have been published in the Downtown Auroran Magazine, in the High Holidays prayer book for the Aurora Jewish Renewal Congregation and on a variety of online sites.

Her poetry has been used for a number of public presentations, including exhibits for National Poetry Month in collaboration with the Illinois State Poetry Society.

“Poetry is a way in which people from all walks of life and backgrounds can share their experiences, relate to one another as human beings, develop self-awareness and connect to the natural world,” said Fullett-Christensen. “Poetry can lend elements of celebration, joy and seriousness to all observances, recognitions and dedications.”

The other finalists – Quentin Johnson, Fermina Ponce and Anthony Stanford – will all serve as Aurora Poet Ambassadors in deputy poet laureate roles. In addition, one high school student will be added to the group early next year.

In January, a public installation ceremony will be held at Gwendolyn Brooks Elementary School in Aurora. The school is named in honor of former Illinois Poet Laureate, Gwendolyn Brooks, who died in 2000.

Winter outerwear is being accepted for donation now through Dec. 25 at all Elgin fire stations. Gently used coats and winter wear, collected on behalf of the Community Crisis Center, will be distributed to men, women and children at no cost throughout the cold weather season.

This year, the Community Crisis Center has a high demand for adult coats, especially larger sizes. Used items should be clean and without missing buttons or broken zippers. Coat donations should be limited to warm jackets, parkas and coats. Other items accepted include gloves, mittens, hats, scarves, boots & snow pants.

Donations can be delivered to any of Elgin’s seven fire stations. Fire station locations are available at cityofelgin.org/¬firestations.

A Darien man has been charged with multiple counts of possession of child pornography, both Class 2 and Class 3 felonies, due to an incident that occurred in the 3800 block of Ohio Avenue in St. Charles.

According to a St. Charles Police Department news release, Richard A. Kusnierz, 58, of Darien, was taken into custody on Monday (Dec. 2, 2019) following a weeklong investigation.

Officers initally responded on Nov. 25 to a business located in the 3800 block of Ohio Avenue for a report of a discovery of child pornography found on a digital storage device card that had been found on the floor inside the business.

According to a published report, Kusnierz was an employee at that business.

St. Charles police officers and detectives began an investigation, working to obtain any information related to the owner of the SD card, which was discovered along with a group of other SD cards.

Through that investigation, content was discovered that linked Kusnierz to the cards.

Court records indicate Kusnierz was charged with 15 counts of possession of child pornography.

Mayor has ‘low tolerance’ for vaping sales to minors

St. Charles is sending a message to local businesses that sell vaping products to minors.

“Problems with young people vaping have become more prevalent,” Rogina said in a city of St. Charles news release. “I have a low tolerance for this type of violation. It is clearly within my authority to address future violations with a license suspension or revocation.”

As of Nov. 27, the state of Illinois has seen 188 cases of e-cigarette or vaping-product use related to lung injury, according to the initially.

Kane, DuPage, Will and Cook are the only Illinois counties to have reported 10 or more such cases, according to the IDPH.

“We appreciate the support of Rep. Lori Trahan (D.-Massachusetts), David McKinley (R-W. Va.) and the members of the task force in standing up for Minor League Baseball and speaking out against MLB’s effort to cast off thousands of jobs, reduce affordable, family-friendly entertainment and undermine grassroots support for our great game,” said Cougars Vice President and General Manager Curtis Haug.

While the Kane County Cougars were not on the list of teams facing the possibility of elimination under the MLB proposal, the Cougars will remain vigilant and united with all Minor League Baseball teams in opposition to the MLB plan.

Minor league teams are vital to the social and economic lives of millions of Americans; they support scores of local businesses and jobs, provide accessible entertainment, help promote tourism spending and donate tens of millions of dollars in charitable contributions.

“With this proposal, MLB is willing to break the hearts of dozens of communities across the country,” said Haug. “We are going to resist this plan and are gratified that so many in Congress are willing to join with us.”

The Kane County Cougars have announced multiple improvements to the Cougars Reading Club as well as a new Ozzie and Annie Classroom Appreciation 1K Grant, the first announcement of several enhancements the Cougars will be making ahead of their 30th anniversary season.

Prior to the 2020 season, Ozzie and Annie Reading Scholarships were awarded to six local students for the lasting impact their involvement with the Cougars Reading Club has made in their everyday lives. Moving forward, the Cougars will now be awarding 10 total scholarships at $500 each in an effort to expand the appreciation for student involvement and assist with continuing their education.

Each student that participates in the reading club receives multiple rewards including a Golden Ticket. Beginning with the 2020 season, all Reading Club participants who present their Golden Ticket at the box office will be awarded two complimentary tickets for all June-September games, which doubles the ticket reward from previous seasons.

New for 2020 is the Ozzie and Annie Classroom Appreciation 1K Grant. This program will award one teacher’s classroom with a $1,000 grant to show appreciation for their participation in the Cougars Reading Club.

Cougars mascots and goodwill ambassadors, Ozzie and Annie T. Cougar, will present the check to the winning teacher and their classroom. Additional details regarding the Classroom Appreciation Grant will be announced soon.

Teachers interested in registering their school or classroom in the Cougars Reading Club can visit kccougars.com for more information.

A Batavia juvenile faces charges for possessing explosives following a multi-agency investigation that included the FBI.

Authorities recently received information that a juvenile had possession of potentially explosive materials. Further investigation led to the charges.

Batavia Chief of Police Dan Eul said any potential danger ended when the arrest was made.

“Our priority is the public’s safety,” he said. “We believe that there is no current threat to the public.”

The juvenile is presently in custody at the Kane County Juvenile Justice Center, the State’s Attorney’s Office said.

Illinois’ Juvenile Court Act prohibits the release of more specific information, including but not limited to the juvenile‘s identity.

A convicted felon from Chicago faces multiple charges after he brought a stolen shotgun onto a Metra train recently in Elburn.

According to an Elburn Police Department news release, officers were dispatched at around 10:12 a.m. on Nov. 29 to a report of a suspicious subject with a gun at the Metra station located in the 400 block of East Railroad Street.

The conductor said he called police because he saw the barrel of a shotgun sticking out of the end of a large bag the man was carrying.

The conductor told police that the man — later identified as 29-year-old Michael T. Johnson of Chicago — did not threaten anyone with the gun, and the conductor was able to get the subject to put the bag in a luggage area on request while the police were notified.

“The conductors on scene related they were concerned the subject may have additional guns on him,” the news release said.

Elburn police took Johnson off the train and into custody without incident.

The Kane County States Attorney’s Office approved the felony charge of Unlawful Use of a Weapon/Possession By a Convicted Felon. Additionally, Johnson was charged with No Valid FOID Card.

Elburn police said the shotgun Johnson had in his possession had been stolen from a relative’s house without their knowledge. That theft occurred in another jurisdiction, and the victim refused to pursue charges for that theft.