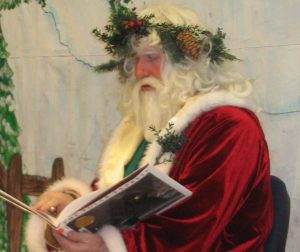 Start your December with an engaging and entertaining exploration of the man in the red suit, when popular performer Terrence Lynch takes on holiday history and mythology with The Legend of St. Nicholas.

The performance is organized by the Norris Cultural Arts Center in St. Charles. Wednesdays @ One events are presented free of charge, thanks to the sponsorship of Colonial Cafe.

For more information and to register, go to www.NorrisCulturalArts.com or call 630-584-7200.

Start your Christmas week with an upbeat concert of seasonal favorites, when award-winning vocalist Maureen Christine, Michael Bazan and the 1st Choice Big Band present Songs of the Season…with a Twist! on on Saturday, Dec. 18 at 7 p.m.

Performing a “prelude” set of holiday tunes at 7 p.m. will be the award-winning Wredling Middle School orchestra. Maureen Christine’s concert with Michael Bazan and the 1st Choice Big Band will begin at 7:30 p.m.

Christine is an award-winning vocalist and celebrated Broadway-style entertainer. She has concertized around the world from Germany to Chicago, appearing at prestigious concert halls, opera houses, cabaret and jazz clubs, and historic landmarks. She has won critical acclaim from New York’s Pink Paper for her “remarkable musical range and superb phrasing.”

Michael Bazan — saxophone, flute, clarinet — has enjoyed a long, successful career as a professional musician and educator. He earned his bachelors of music education and his master’s degree at DePaul University.

Bazan has also performed in various symphony orchestras, including the Rockford Symphony Orchestra and the Galesburg Symphony. He continues to learn and perform in the Chicago area and throughout the Midwest.

For more information and to register, go to www.NorrisCulturalArts.com or call 630-584-7200.