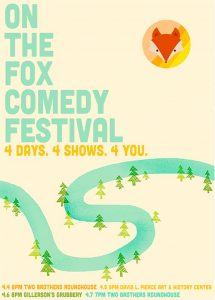 On The Fox Comedy Festival debuts in downtown Aurora with a four-day slate of shows from April 4-7.

“If you like stand-up comedy, this festival is for you,” said festival organizer Matt Drufke. “Our goal is to showcase high-quality regional talent at outstanding venues in downtown Aurora.”

On The Fox Comedy Festival teams up with Still Not Friday Comedy, a weekly free stand-up comedy night, for two shows at Two Brothers Roundhouse. On Thursday, April 4, Rockford native Scott Galvin will make his debut album recording at the Roundhouse.

“Scott has produced successful comedy shows in Rockford, and has opened for national headliners,” said Drufke about the comedian. “His dry wit and unique perspective are engaging and hilarious.”

Drufke is a producer of Still Not Friday Comedy, the showcase which will celebrate its four-year anniversary at Two Brothers Roundhouse in June 2019. Both Drufke and Still Not Friday have been the recipient of several “Burbies” awards, given annually as recognition by peers in the suburban comedy community.

Still Not Friday has won for Best Showcase each of the past three years, while Drufke is a two-time winner for Best Producer. Drufke credits the Roundhouse: “Two Brothers Roundhouse is one of the best venues for live entertainment in the suburbs, period.”

On Friday, April 5, the festival presents a lineup curated by Chicago-based comedian Meredith Kachel at the David L. Pierce Art & History Center. Kachel is the executive producer of one of Chicago’s longest-running comedy showcases, Chicago Underground Comedy, a weekly exhibition of the city’s best alternative comics established in 2005.

“I’ve run DIY spaces for nearly seven years in Chicago, which means I’ve gotten to see some of the best and most interesting alternative comedy we have to offer,” said Kachel. “I’m excited to provide comedy fans a place to enjoy what I think are Chicago’s best up-and-coming artists.”

On Saturday, April 6, the festival continues with a stand-up showcase at Gillerson’s Grubbery produced by A-OK Comedy. Based in St. Charles, A-OK Comedy holds the distinction of being the longest-running independent comedy showcase in the suburbs after celebrating its eighth anniversary in January.

Sunday, April 7, finds the festival back at Two Brothers Roundhouse for a co-production with Still Not Friday Comedy presenting the students of Metea Valley High School Mustangs Improv Team.

Festival organizer Matt Drufke has been serving as a volunteer instructor for the team. “The kids have been working hard over the past few months to develop acts that will be sure to entertain you,” said Drufke. Past performers of Still Not Friday, Drufke’s weekly comedy showcase at Two Brothers Roundhouse, will close out the show with feature and headlining sets.

“On The Fox Comedy Festival was created to give audiences a multi-day experience of amazing comedy with the intention of bringing in visitors to the heart of Aurora’s downtown,” Drufke said. “We’re proud to have worked with Two Brothers Roundhouse for over three years on producing the best independent comedy showcase in the suburbs.

“The festival gives us the opportunity to extend our reach and really highlight all there is to see and do in Aurora, while contributing to the efforts of the Comedy Shrine and City of Lights Comedy Night in putting the City of Aurora on the map as a premier comedy destination in the Midwest.”

The debut events in April are the first in a series the production team plans to launch. Admission to the festival is free, though guests are encouraged to register their attendance via Facebook and Eventbrite.