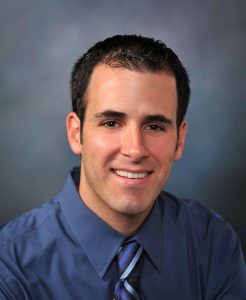 Montgomery Village President Matt Brolley is hoping to take his local political experience to the state level, and announced Thursday, June 29 that he will run as a Democratic candidate for Congress in Illinois’ 14th District.

That seat is currently held by Republican Randy Hultgren.

An engineer by trade, Brolley, 35, said his “rational, level-headed” approach to politics is what Washington needs right now.

“Engineers like to fix things, and Washington is broken right now,” Brolley said. “With the election last November and the new president, we have seen less rational, logical problem-solving than there ever was before. I think it’s time to send an engineer to Washington.”

Brolley, who lives in Montgomery with his wife and two children, said his goal is to be a voice for the middle class — a voice that’s lacking under Hultgren’s tenure in Congress, he said.

“The middle class built this country. They are the heart and soul, and they’re being ignored in Washington,” Brolley said. “Those votes (Hultgren) is taking when in Washington — selling our personal data, the healthcare bill he voted for — he’s not representing the vast majority of this district. When you win an election you represent 100 percent of the residents in your district. We’re certainly not seeing that.”

Hultgren is one of several Illinois Republican lawmakers who has come under fire from voters at different times this year for either not holding or not showing up to town hall meetings.

Still, Brolley acknowledged that the 14th District is typically a Republican base, but that’s not standing in his way as a Democratic candidate.

“I know this was drawn to be a Republican district, but that was 10 years ago. The district is changing, a lot like the country is,” Brolley said.

He said he’s had a lot of support since announcing his candidacy and that he believes people are excited to have a “solid challenger against Hultgren”. 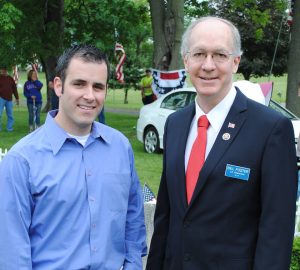 Brolley has already received the endorsement of Congressman Bill Foster, the only Ph.D. scientist in Congress.

“We need more voices of reason like Matt in Congress,” Foster said. “His background as an engineer will serve our country well, and I know he can help tackle the real issues that families face.”

Those issues, Brolley said, include things like healthcare, infrastructure and finding jobs for the middle class.

“I’m really trying to build on what I’ve already done locally,” he said. “I’ve worked with Republicans and Democrats on the (Montgomery) village board to accomplish very important things … I want to take that now and represent the 14th District.”

Brolley said he wasn’t planning to run for Congress, much like he wasn’t vying for the position as village president of Montgomery when the opportunity presented itself.

In 2013, after seeing “too much extremism and not enough common sense” in his hometown, Brolley decided to run. He was re-elected earlier this year and is now serving his second term.

“My skill set puts me in the position to lead this district,” Brolley said. “I did not have this in the cards to do right now, but given everything that’s going on, and Hultgren being silently obedient with what Trump is doing, it warranted this run. ”