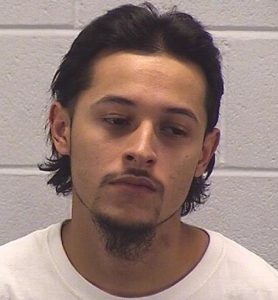 Thanks in part to a citizen’s tip, charges have been filed against a 21-year-old Aurora man for allegedly concealing the death of a Yorkville woman.

Aurora Police said that in early May, Bruno Muro, 300 block of Beach Street, dumped the body of Marisa MacDuff, 21, in a wooded area in Aurora after MacDuff overdosed inside his vehicle.

Police spent nearly two months investigating MacDuff’s death after her body was discovered by a homeless man around 10:30 a.m. on May 11 in the 900 block of N. Lake St. Aurora Police Sgt. Matt Thomas said a Crime Stopper tip eventually led to Muro’s arrest.

According to prosecutors, Muro and MacDuff were driving around the near east side of Aurora sometime on May 9 or May 10t while MacDuff ingested heroin. She eventually overdosed, and was driven by Bruno to the 900 block of N. Lake Street where he put her body in a wooded area behind an abandoned business, police said.

Her body was discovered on May 11, launching the investigation.

Halfway through that investigation, police got the break they needed, Thomas said. It came in the form of a tip line call.

Thomas acts as the liaison for the Aurora Police Department Crime Stoppers tip line. He said the program’s success has been great, and the tips have been imperative in solving cases like MacDuff’s.

“We have a lot of good calls that come in on Crime Stoppers, and we pay out a lot on that information,” he said.

The crimes solved have ranged from armed robbery to shootings and outstanding warrant arrests.

“When we receive the tips, obviously we have to verify them and their authenticity,” Thomas said. But, when they do pan out, the payout is big for both the tipster and police.

“I’ve personally requested and been approved for several payouts this year,” Thomas said of the program’s effect.

Police said they are still trying to gather details about what happened on the evening of MacDuff’s death, but that Muro has provided a statement.

“There’s a lot of details he did not share,” Thomas said. “But we don’t suspect anyone else was involved in the concealment.”

Thomas said charges of drug-induced homicide are not likely to be filed.

Muro was taken into custody at his home without incident. His bail was set at $20,000. He is currently being held in the Kane County Correction Center in Geneva.