A now-empty parking lot west of Orchard Road was once home to Oswego’s Park and Ride bus service to the Aurora Transportation Center. It was also projected as site for a possible Metra commuter rail station and could be once again if service expands to Kendall County communities. (Photo by Jack McCarthy / for Chronicle Media)

The empty park-and-ride lot west of Orchard Road in Oswego is a testament to nearly three decades of unsuccessful attempts to extend Metra commuter rail service from Aurora to Kendall County.

Once projected as a site for an Oswego rail station, the lot has been unused since village-subsidized bus service to the Aurora Transportation Center was suspended several years ago.

But the region’s commuter rail agency is now taking a fresh look at potential service.

A new study is looking at costs to build  the platforms and stations, improve signals and figure out where to store trains for an extended Burlington Northern Santa Fe line to Montgomery, Oswego and even further west to Yorkville, Plano and Sandwich.

An infrastructure study is just the first step and the biggest obstacle — who pays — will have to be addressed by politicians, transit administrators and perhaps even voters.

All towns but Montgomery are currently located outside the six-county Regional Transportation Authority region. In order secure an extension, the communities either may have to join RTA and assess a sales tax or figure out some other way to fund rail service.

Oswego, Yorkville and Plano are located in Kendall County while portions of Sandwich are split between Kendall, DeKalb and LaSalle counties.

An engineering study and the related environmental study would help determine much the extended service would cost and where possible end points would be. Both are currently expected to be completed by the end of 2019.

Daniel Di Santo, Oswego village administrator,  told Chronicle Media that once study results come back, his village and other municipalities will look at the costs and whether to proceed.

The Burlington Northern Santa Fe line, which currently terminates in Aurora, is the busiest  in the Metra system in terms of ridership.

Most trains go to the end of the line at the Aurora Transportation Center, which is also the site of a major storage yard. Other trains originate and terminate at other stations further east.

The BNSF Railway company, which owns the tracks, also uses the line for freight trains while running Metra trains under contract with its transit agency.

A proposed extension would continue west along the tracks already used by the Amtrak trains, which run through all five municipalities.

While Plano already has a train station, the current Amtrak service is limited to twice-daily inbound and outbound services. But the morning train doesn’t arrive in Chicago until 10:30 a.m., making  it impractical for workplace commuting.

Di Santo told the Chronicle that a Metra station would have “a huge impact” on Oswego. 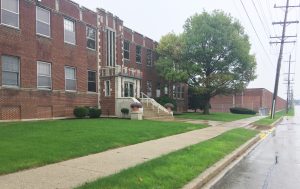 An ideal station site in Montgomery could be at the former Lyon Metal building in the downtown area, but the village was open to other locations.

“It would an incredible boost to the economy,”  he said.  “It would bring jobs, more workers to Oswego. And it would promote higher quality [of life] for residents, who would be able to go to Chicago for entertainment and job purposes.”

Oswego felt so strongly about the idea that around 2004 it purchased five acres south of the BNSF tracks and west of Orchard Road, to build a parking lot that would be ready for commuter use once the station is built.

In 2016, the village purchased additional 15 acres to put in another parking lot. He said that Oswego currently hopes to put the station on the south side of the tracks.

Jeff Zoephel, Montgomery’s Village Administrator, told Chronicle Media that his employer has been discussing a rail extension since at least 2001. He said that expansion would benefit the residents, especially in terms of workplace commuting.

A Montgomery Metra station has been part of several development studies over the last two decades.

Zoephel said that an ideal station site would be at the former Lyon Metal building in downtown Montgomery, but the village was open to other locations.

Metra spokesperson Michael Gills told Chronicle Media that according to 2016 ridership survey – the most recently conducted survey – there are already commuters who are driving to Aurora to catch Metra.

In July 2018, an Oswego village board resolution urged the Chicago Metropolitan Agency for Planning, which distributes development-related federal grants to municipalities in Kendall County and elsewhere in the Chicago area, to make the BNSF extension as one of the top priorities in its upcoming regional plan.

The top-tier status makes it easier for projects to get grants.

In the meantime, Metra is using federal funds to conduct its engineering study and an environmental review study for the extension. While the transit agency was originally supposed to go out to bid last year, Di Santo said that, as he understood it, issues with BNSF Railway slowed the process down.

Since then, those issues have been resolved, and Metra went out to bid on the engineering study two weeks ago. The bids are scheduled to be opened in November, and the Metra Board of Directors is expected to award the contract later this year.

Gillis said that the study will be completed within 12 months after the contract is awarded. He said that Metra will use an existing contractor to do an environmental review study concurrently with the engineering study.

According to bid documents available on Metra’s website, the studies would look at the feasibility of extending the line to Montgomery and Oswego, and either ending the line at Yorkville or continuing at west to either Plano or Sandwich.

The engineering study will focus on logistics, delving into the ins -and-outs of building an additional train track, adding signals and other infrastructure The Environmental Review study would look at the possible service schedules, potential ridership and revenue and determine how different service levels and different end points would affect the costs.

It would also look at any environmental issues that may need to be addressed.

Di Santo said that Oswego would ideally like to see the line extended as far as possible, it would have to consider costs.

The bid documents include potential station locations. For Montgomery and Oswego, the contractors would simply study the Lyons site and the village-owned property, respectively.

For Yorkville, the study would look at several sites – either north or south of the tracks east of Eldamain Road, or at the southwest corner of the Cannonball Trail crossing.

For Sandwich, it would look at the site north of the tracks, somewhere between Gletty Road and Fairwinds Crossing. While the extension might use the existing Amtrak station in Plano, the contractors will also study “Site B” further west, at the northeast corner of the spot where Little Rock Road crosses the tracks.

As the bid documents acknowledge, the extension would need to clear several hurdles.

First, there is capacity. While BNSF Line and the portion of the freight line that reaches Fox River has three tracks, the portion between Fox River and Sandwich has two.

The bid documents indicate that “track and signal improvements” – including adding a third track- would need to be made to ensure that the segment can handle the increased commuter traffic. If the extension doesn’t go past Oswego, Metra would also need to either expand its existing 14th St. train yard in Chicago or build a “small reliever yard with three tracks” west of Aurora to store the trains during the day. If the extension goes further west, a new, larger train yard would need to be built at whichever city the line ends at.

The RTA service area includes Cook, Lake, McHenry, DuPage, Will and Kane counties. The sales tax collected within the counties include a special surcharge that helps fund RTA and its member agencies. As RTA’s website notes, the sales tax is 1.25 percent in Cook County and 0.50 percent in the other five counties.

Under the state law, Metra can’t spend any of its own funding – or funds it gets from the RTA – to extend and operate service outside the RTA service area.

Montgomery is mostly located in Kane County, and its preferred station site is located with the Kane County portion of the village.

While Metra’s Union Pacific North Line extends past the RTA service area, into Kenosha, Wis, Gillis previously explained to the Chronicle that this was already the case when Metra signed the original service contract with Chicago & North Western Railroad, and that it maintained the arrangement with Union Pacific Railroad, the current owner of three Union Pacific lines.

The fee Metra pays covers the entire service, Gillis said, and the Kenosha portion doesn’t cost it anything extra.  While Metra could have cut the service to Kenosha, it chose to continue it because the alternative – constructing a new rail yard within Lake County – would be more expensive than taking advantage of the existing Kenosha rail yard.

BNSF Line, on the other hand, never went past Aurora, so the commuter service extension would be a completely new territory for both Metra and BNSF. According to the bid documents, extending the service would require the two entities to renegotiate their agreement to account for “labor and other associated issues.”

Gillis told the Chronicle that Kendall County wouldn’t necessarily have to join the RTA in order for the extension to happen. So long as the four municipalities figure out a way to pay the costs that would normally be covered through RTA and Metra funds, Metra would be open to building and operating the extension. Gillis said that one of things the two studies will look at is possible funding mechanisms.

Di Santo said that Oswego would wait for the results of the study to see what the costs actually are before deciding on the course of action.

“We are not going to join RTA until we finish the study,” he said. “And it will  [show] whether it’s possible, and how much it costs.”

Gillis said that Metra’s current priority is focusing on the existing system, but it has no issue with completing the study and letting Kendall County and the four municipalities decide whether they are willing to make the financial commitment necessary for the extension to proceed.

“Metra is focused maintaining its existing system, but we are completing these studies with the previously awarded federal earmarks,” he said. “ Additional external funding for both construction and ongoing operations will be required for this project to proceed.”