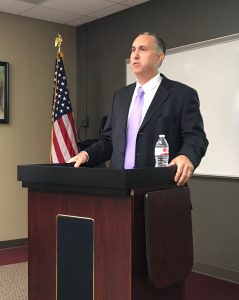 Instead, his pleas are for a much different kind of cash flow, and one that’s unexpected from a man like himself.

When he goes to Springfield, Weis asks for early childhood education funding, which will not only help Kendall County children, but will help his own department in the long run.

Good students, prepared students, eager students, often stay out of the court system, saving the state billions of dollars each year on prison and jail funding, he says.

Reaching out to help kids early — before children reach the age of 5 — can make a huge impact in seeing the numbers of those convicted wane.

In Kendall County, there are 10,861 children under the age of 5. By the time they reach kindergarten, 80 percent of those children will not be reaching standardized education benchmarks of kindergarten entry.

Knowing this, and the fact that 90 percent of a child’s brain develops in the first five years of life, it is crucial to engage young children in early childhood education programs to allow they the best chances of success, Weis said.

He told those local leaders present that he urges lawmakers to understand that if money isn’t spent on early education, it will be spent on the prison systems where failing students will likely end up.

“It cost much less to prevent the disease than it does to treat the disease,” Weis said. “We have to look locally in terms of putting collaborations together and funding together if we want to make differences in our local communities, and that’s what we need to do right now.