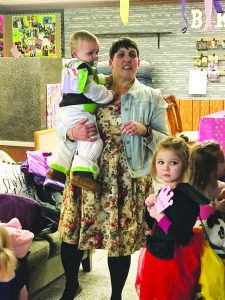 If you looked around, you wouldn’t have had a clue.

You’d have had no idea the pain, worry and stress these tiny bodies have endured. Instead, you’d simply see little girls dressed as princesses, with braided hair and sparkly shoes–each with one thing in common: smiling faces.

What you wouldn’t realize, is that amongst the group of tiny Princess Tea Party participants were little girls battling cancer.

“Our kids our just kids,” Mossburg, a five-time cancer survivor, said during the Feb. 16 event at Bike Bald headquarters in Oswego. “Bike Bald is their opportunity to no longer be looked at as a ‘Cancer Kid’.”

Bike Bald, non-profit that began 15 years ago to promote and enhance art, music and educational programs while supporting children with cancer and rare illnesses, moved from Naperville to Oswego in October 2018.

Since then, Mossburg has transformed her space at 27 Stone Hill Drive into a calming oasis for the community, as well as those dealing with cancer and other rare illnesses.

She hosts daily painting classes for $10 as a way to raise funds. She rents out the space (coffee bar included) for bridal parties, book clubs and sewing groups.

Teens come to study after school, friends take free yoga classes together, and a tea party or two is held from time to time.

“We are a support system for children with cancer and rare illness, but it goes beyond that. We’re also here for the parents, and the siblings, and we are open to the community. What a great way to raise awareness than to involve the community,” Mossburg said enthusiastically.

Behind the scenes, Bike Bald works with more than 4.000 children nationally, 1,763 in the Chicagoland area, and 176 children in Kendall County specifically.

The organization’s volunteers tutor children, send them for treatment trial across the country and nation, and continue to support families long after treatment ends and remission begins. The organization’s five main volunteers grant the wishes of nearly 200 children on an annual basis, provide thousands of handmade cards to children in hospitals, perform monthly Random Acts of Kindness, and keep art and music at the forefront of people’s minds by offering a variety of classes for the entire community.

Mossburg stressed the fact that children with cancer and other rare illnesses miss an average of 126 days of school a year, which can lead to a loss of friendship. Bike Bald gives kids an opportunity to rise above those roadblocks. 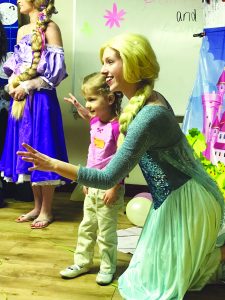 Willow Watson dressed as Elsa from the Disney movie “Frozen” for the Bike Bald Princess Tea Party on Feb. 16. Watson, 19, is a student at North Central College in Naperville and a cancer survivor. (Photo by Erika Wurst/for Chronicle Media)

Willow Watson, 19, a student at North Central College in Naperville, is a prime example of what the Bike Bald mission is all about.

Watson was diagnosed with an extremely rare form of cancer at the age of 14. During her treatment (she was living in Arizona), her specialists linked her up with Bike Bald, a non-profit organization in Illinois. From there, Watson and Mossburg’s relationship blossomed.

Mossburg has become a mentor, a mother-figure, and a friend to the young woman who she promised to never leave behind.

“She welcomed me as part of her family and into her home. She helped me with college and therapy. At Bike Bald, we don’t just leave kids behind when they stop fighting cancer,” Watson said. “We don’t stop there.”

Watson, herself, is living proof of that testament. She has gone on to become an integral part of the Bike Bald team, and is using her strength and struggle to give back.

Dressed as her favorite Princess, Elsa, Watson glided down the stairs at Bike Bald Headquarters during the Feb. 16 tea party, where she greeted wide-eyed little girls. She spent the afternoon taking pictures with and engaging pint-sized versions of herself.

“The most amazing thing Bike Bald gave me was hope,” Watson said. “This means I can give other kids hope as well. What I learned through cancer, I can use. It wasn’t just pain and it wasn’t just hurt. I can learn from it and help others, and that’s the best thing in the world.”

And giving back, these days, means a lot more than simply shaving a head in solidarity or wearing a yellow ribbon for childhood cancer.

“Childhood cancer is not rare anymore. It surrounds us 24/7 with no boundaries. It attacks no matter what your income is, how many kids you have, and no matter how hard you fight, it can come back. I’m proof of that,” Mossburg said.

Knowing this, her mission is to be there for children during and after their struggles. She wants to support them through education, music and art, and make them feel accepted, cared about and loved.

“At Bike Bald, these kids are not just ‘Cancer Kids.’ We open up to the community and when you come and you see somebody sitting next to you, you don’t know if they have cancer or not,” Watson said.

And that, again, is the point.

For volunteer opportunities, a list of daily programs, and more information about Bike Bald, visit https://bikebald.com/