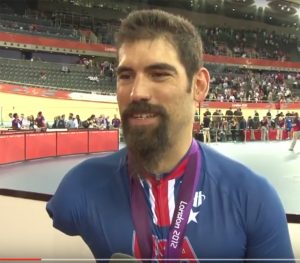 In a moment, in an instant, everything can change. Sometimes one fateful second can make all the difference in the world. No one knows this better than former Waubonsee Community College baseball player Joe Berenyi.

In 1994 the Oswego resident lost his right arm, severely broke a leg and shattered his left kneecap, which had to be removed, in a construction accident. In a split second everything changed for him.

Twenty-two years later, a second of time made all the difference once again for the 47-year-old.

He had led for most of the race before the 24-year-old Aussie pulled ahead with approximately 500 meters left. In a post-race interview a smiling Berenyi was not disappointed with taking home a silver medal.

“I gave it my all and lost by just one second,” Berenyi stated matter-of-factly at the Rio Olympic Velodrome. “It’s never a bad thing to win a silver, I am just very happy because a lot of hard work went into preparing for this.”

The next day Berenyi just missed out on adding another Paralympic medal to his collection.

The following day he was agonizingly close to the medal stand once again. Teaming up with Jennifer Schuble and Christopher Murphy, the U.S. trio placed fourth in the Mixed C1-5 750-meter Track Team Sprint. This time, they finished just one second behind Spain for the bronze medal.

Berenyi also placed sixth overall in the Men’s C3 Time Trial Road Race and finished 10th in the Men’s C1-2-3 Road Race through the hilly and scenic streets of Rio and the surrounding area.

The silver medal at Rio is Berenyi’s fourth Paralympic medal. In 2012 at the London Paralympics, he earned a gold, a silver and a bronze medal in cycling, setting a World Record in a qualifying race before grabbing gold in the 3000-meter Individual Pursuit.

Although he had won a couple of gold medals in national competitions the two years leading up to the London games, he was still somewhat considered a long shot to even make the U.S. Paralympic team, much less win three medals in his first Paralympics.

But in only his third year of full-fledged competition Berenyi officially emerged onto the world stage of para-cycling.

Since then he has continued to have success at the Union Cycliste Internationale Track World Championships. Berenyi has earned four gold medals and two silvers medals in competitions in Mexico, Italy and the Netherlands the last three years.

He was named the United States Olympic Committee’s Men’s Paralympic Athlete of the Year for 2015. He was also nominated for an ESPY in 2015 in the Best Male Athlete with a Disability category, and was among a group of distinguished Paralympic guests invited to the White House in 2012.

Berenyi has certainly come a long way since that fateful August day in 1994, when he and another ironworker fell 40 feet to the ground when a beam on the steel skeleton of the Bolingbrook movie theater was knocked loose.

Before that he was always a pretty good athlete, excelling on the baseball field and the gridiron as a running back in high school despite being just 5’9” and 160 pounds. Berenyi was an outfielder and part-time left-handed pitcher at Waubonsee in 1988 and 1989. He completed an Associate’s Degree in Business Administration after his sophomore season and began working in construction.

Only a year before his accident, Berenyi had begun racing competitively in local events at the age of 25. After the accident he needed a wheelchair and a walker the first year.

He underwent multiple surgeries and was told he would have trouble walking again.

Berenyi didn’t think much about cycling until neighbors began riding to get in shape and encouraged him to join in.