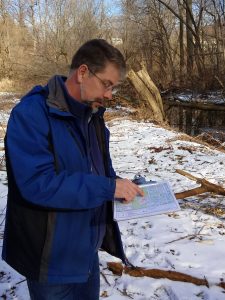 The Waukegan Park District added the final piece to a proposed walking path that would extend from Roosevelt Park, on Belvidere Road, to Washington Park, on Washington Street, along the historic Waukegan River.

Partnering with the city of Waukegan and Lake County Stormwater Management, the project is being reviewed and staged for funding in the park district’s next five-year open space master plan.

The key element was the acquisition of the former Dilger’s Florists site at 219 Carnation Court, in a hollow that employed a flowing artesian aquifer on the river’s west side for its watering system. It is part of the artesian springs, popular in the late 1800s for their mineral water, that flowed at the Magnesia Springs on nearby Glen Rock Avenue and the Quinette Springs at Roosevelt Park. The business was known for growing and selling carnations.

An intergovernmental agreement between the three agencies forwarded the purchase, and the partnering proved beneficial. The $99,000 purchase price of the 1.21-acre parcel, sold Oct. 19, came from a grant by the stormwater management agency, who was interested in the artesian flow and river flooding at the site. The city of Waukegan agreed to demolish the dilapidated building, once used for the retail office and residence, along with issuing the permits.

“The city of Waukegan will be demolishing the main portion of the property that includes the former greenhouse and water pumphouse areas,’ said Tim Girmschied, the park district’s manager of planning services.  “Stormwater management was interested in the property because of the perpetual flooding, although it technically wasn’t in the floodplain of hydrology maps. The Waukegan River is a big area.”

According to obituary notices, Mathias Dilger came to Waukegan in 1893 and started his florist business in the hollow and the Ravine Greenhouse later became Dilger Florists. He also served as Waukegan Township Supervisor from 1928-32, before passing away in 1935. Norma H. Colby, nee Dilger, was a third generation of the florist business with her sister until retiring in 1966. She died April 25, 2015 and resided at Lilac Ledge, across from Washington Park.

After the business closed, the building was used as a residence from the 1980s to 2019. The 219 Carnation Court address leading into the ravine is still a dedicated city right-of-way.

The parcel contains remnants of a roadbed foundation spanning the river, as well as stairs leading, from it, up to the building and greenhouse foundation. A walkway fence with “Dilger’s,” spelled out in metal, above a raised flower bedding area, is partially downed by a collapsed tree. Beavers are presently making quick work of the trees along the river. 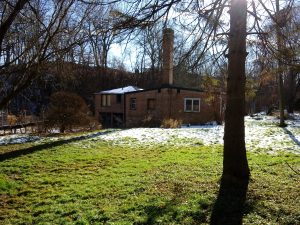 A view of the Dilger’s Florist shop and residence, viewed from the bluff with the artesian well flow. (Photo by Gregory Harutunian/for Chronicle Media)

“Acquiring the land for the river path project was the first step, and the opportunities arose, now you can assess how much did it cost to do all that,” said Girmshied.

The park district has steadily acquired those pathway properties, following a “hopscotch” pattern, which bookends Roosevelt and Washington parks. The motivation was spurred by the district’s master plan for open space, which currently expires in 2021, and involves the process of prioritizing all of the district projects, for its next five-year plan.

A related initiative with community ties is the direct release of trout into the Waukegan River, a watershed with flowage leading to Lake Michigan, less than three miles away from the property.

“Waukegan High School students have been working with Trout Unlimited to raise rainbow trout, from eggs to fingerlings … for about eight years now,” said Girmschied. “Classes will come out here in the spring, and release them. Just looking at the river, you can see the direction is heading south toward Lake Michigan. The fish release there is normally done by the Illinois Department of Natural Resources.

“The river’s south end is more of a king salmon and trout population, and some rainbow trout are coming back,” he said. “There is so much beautiful acreage here.”

From the end of the 1800s, and for about the next sixty years, people could walk down the river path, south from Belvidere Road, and smell the fragrance of carnations and gladiolas wafting through the ravine. Although the scent is long gone, the hope stands of the same path being restored and enjoyed by the community within five years, and as part of a longer trail. City crews are expected to start demolition sometime next spring.

“The demolition, and restoration of this site, is simply a phenomenal accomplishment for our community, and our partners,” said Waukegan Mayor Sam Cunningham. “The history of Waukegan is relatively lost to our youngsters because a lot of the places that we knew as kids have not been kept up, or deteriorated to the point of no return. The love you have for the community, why you have that love, is through these places.

“Bringing those places back, through restoring what still remains, helps share what we loved about the community,” he said. “It makes stronger bonds for us all.”