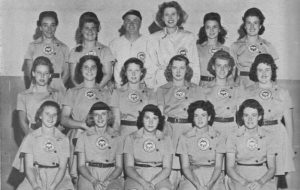 A 1946 team photo of the Kenosha Comets, one of the four inaugural teams of the girls professional baseball league, which lasted from 1943-51. (Photo courtesy of Kenosha History Center)

The 75th anniversary of the All-American Girls Professional Baseball League is being marked this year by cities that hosted teams, during the World War II, with celebrations and events.

That awareness is due to the 1992 film, “A League of Their Own,” which starred Tom Hanks and Geena Davis, as manager and player for the Rockford Peaches.

While Rockford has planned its activities for late May, aimed at fundraising for the International Women’s Baseball Center and the adjacent Peaches’ home, Beyer Stadium, the league extended into other Midwest cities skirting north of the Chicago area. Established by Chicago Cubs owner, P.K. Wrigley, a “local” team sprang up, just over the Illinois state line, and north of the Lake County border.

The Kenosha Comets were part of the original four-team aggregation and won the second half of the inaugural 1943 campaign, but lost the playoffs to the Racine Belles. They played at the historic Lakefront Stadium, a site that once hosted the Chicago Bears, before relocating to Simmons Field on Sheridan Road. 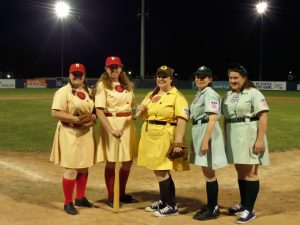 A reunion of the four league teams, with former players, took place in 2000. (Photo courtesy of Kenosha Kingfish)

Built by the owner of the Simmons Bedding Company for the factory baseball teams, the grandstand was demolished by fire in the opening 1920 season, and erected again in 1930.

When the league folded in 1951, the Comets ended. The ballpark hosted a succession of college and high school sports games, semi-pro teams, and the Minnesota Twins “Class A” minor league team. Enter the Kenosha Kingfish ownership group, five years ago.

Their patron saint is surely Bill Veeck Jr., as they note his aphorisms: 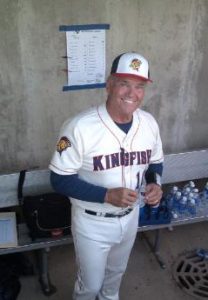 The ownership group is a trio with Vern Stenman, Conor Caloia, and Steve Schmitt. They also operate the Wisconsin-based Madison Mallards, the Wisconsin Rapids Rafters, and the Green Bay Bullfrogs franchises. In 2013, Stenman said, “This is a public and private enterprise between the city of Kenosha, and our Kenosha baseball group. We love refurbishing old ballparks, and especially historic venues like Simmons Field.”

They immediately undertook a $1.4 million renovation of historic Simmons Field with new steel girder buttressing, concrete-base foundations, and replacing the iconic green-painted benches behind home plate’s first tier and the aged row-benches along the baselines with upgraded wider seating. King Elvis, a fierce-looking kingfish, was chosen to become the team mascot.

With Amtrak and freight trains running parallel to the right and center outfield fences add up to a cozy feeling, and the ballpark has a pure Wisconsin atmosphere with the German word, “Gemutlichkeit,” thrown in somewhere. Amenities have been expanded for comfort, and the between-innings shenanigans abound like giving away car wash coupons for the lot’s dirtiest car.

The team roster is comprised of the top local, state, and national college players. The competition against other similar teams is brought together under the umbrella of the Northwoods League. Continuity is also a factor in providing coaching for the summer league athletes, with Duffy Dyer returning for his fifth season as manager.

Dyer is best remembered for helping to break the hearts of Cubs fans in September 1969, sharing the catching duties with J.C. Martin, for the World Series-winning New York Mets. With a 151- 136 record overall, he helmed the Kingfish’s 2015 Northwoods League Championship squad. Dyer had a previous stint in the city when he managed the Kenosha Twins, the Minnesota Twins affiliate, to the 1985 Midwest League Championship.

“The summer at Simmons Field is so beautiful, and the city of Kenosha is so welcoming that returning for another season was the easiest decision in the world,” said Dyer, in a release. “The city supports the team so well. The sell-out crowds and atmosphere of the ballpark make our guys excited to take the field every night. I’m looking forward to getting back to town this season to work with the players.” 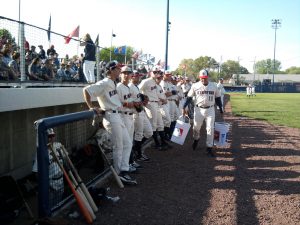 The Kingfish, prior to the start of a contest against the Mankato squad, last summer. (Photo by Gregory Harutunian/for Chronicle Media)

Along with renovations to the facilities and stadium, the owners are coordinating efforts to mark the efforts made by the Kenosha Comets to the game of baseball. In 2003, AAGPBL players returned to Simmons Field for a reunion, and dozens of the former players dedicated a plaque to commemorate the baseball league’s time in Kenosha.

“We have a permanent display dedicated to the Comets at the park, and a plaque on the stadium concourse wall with the team photo, and legend,” said Caloia. “We wanted to mark their contributions and what they achieved here at Simmons Field. We’re still finalizing our promotion schedule for 2018.”

The season opener is a May 29 twilight contest against the Battle Creek Bombers.