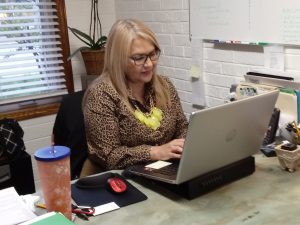 With 98 individuals getting their general education development certifications in a two-year span, one of the Highwood Public Library’s many programs is proving to be an educational success story for English-As-A-Second Language learners by offering the equivalency of high school level courses as a gateway to future endeavors.

The library is championing programs aimed at promoting literacy while being a community resource and a welcoming environment.

The GED is an alternative route comparable to a high school diploma, consisting of four core parts: Social studies, language arts, mathematics, and science. The library also includes the U.S. Constitution as part of the curriculum. The accomplishment of gaining another skill-set to people emigrating from another country is tantamount to navigating in a new setting, along with overcoming other barriers.

Carmen Patlan, the library’s executive director since February, is aware of those barriers for ESL learners and has recognized them as being similar to those encountered during her tenure at the Waukegan Public Library. She wants to address those needs.

“Within the next 10 months, we want to complete a survey and find out what barriers are impacting the community. At Waukegan, we identified them as a low literacy rate, a lack of computer skills, temporary visa driver’s license issues, and a limited understanding of health programs,” she said. “We implemented resources to break down those barriers.

“At Highwood, we see similar circumstances and how do we enhance the solution to those needs? Exactly the same way … it’s a library.”

A number of programs are already underway, and being initiated, such as conversational English, as well as citizenship classes in English and Spanish. As of May, the GED class has 26 students enrolled for the evening sessions. Several nights each week, the lights from the class meeting room window shine out to the sidewalk in front of the 102 Highwood Ave. location.

Favio Gomez teaches the GED class in Spanish, and has been an instructor for six years. “The materials we use are in Spanish, and the most important thing is using that material. It gives the person an opportunity to practice themselves. Primarily, it’s to learn and pass the GED tests while being comfortable with the tutor, the classroom, and the materials.” 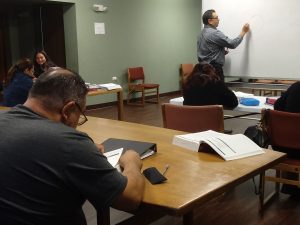 GED Instructor Favio Gomez teaches class at the library, where 26 students have enrolled in the program. (Photo by Gregory Harutunian/for Chronicle Media)

Selina Gomez-Beloz, the Waukegan Public Library’s executive director, said “It (education) can be very important depending on where people are coming from, in that their high school education may not be complete, or the equivalency is not met. At the least, having the GED certification is necessary for work, or most employment situations. People from other countries also find their education level may not be transferring to our system.

“We have a robust education and literacy department with ESL classes, and digital literacy classes … from how to use computer to learning to read for ESL individuals,” she said.

Patlan knows the effort brings its own rewards. She related the story of a 61-year-old mother without an education, who worked and put three children through college, yet felt she was not smart enough to learn. “It’s inspiring to be near something like that … to see the resiliency is amazing. Look what she did … three college-educated children, and she felt not smart enough? No. I said it was her turn now.

“I’m the biggest cheerleader for those kind of efforts,” she said. “I feel blessed to be in Highwood, and to be in a position where we can offer something transformative and life-changing like these programs. We have educational resources that are geared toward adults that never had a chance to go to school.”

For more information on specific library programs, go to the library website at www.highwoodlibrary.org, or call 847-432-5404.