Mild autumn weather launched Oktoberfest in Long Grove on Oct. 5 at Buffalo Creek Brewing on its third anniversary of being in business. 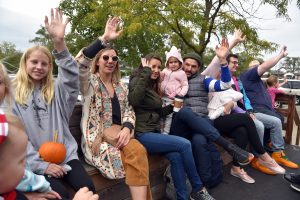 The family event was held on Buffalo Creek Brewing’s premises at its taproom, the second level Rustic Room and biergarten.

With the Rotary Club of Long Grove, Kildeer and Hawthorn Woods, Oktoberfest was also for a good cause at 360 Historical Lane.

Proceeds from a raffle, which featured more than $7,000 in value prizes, benefited the local Rotary Club. 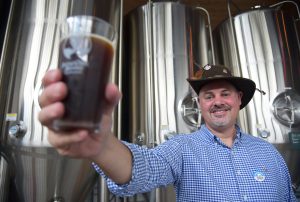 “In order to be a citizen and any part of any community, you really want to be a part of that community and part of that is actually giving back and doing charitable work,” Marr said.

“I’ve done that my entire life.”

“His team has just really helped out … (to) bring the community together.

“And that’s what it’s really about, is having fun while still giving back to the community.”

Cardelli said the local Rotary Club is actively involved as a good neighbor.

“We do a lot for the local community, food pantries, we provide dinners, roadside cleanup, and really just try to give back to the community as best we can,” Cardelli said. 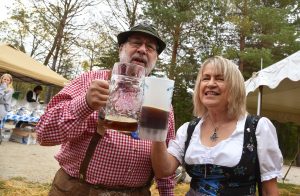 Other brewery specialties include a candy corn flavored beer for Halloween, a barrel-aged bourbon variety for November plus a pumpkin pie batch in time for Thanksgiving.

Trying his hand at Hammerschlagen, the nail driving game, was Ryan Birch of Barrington, also part of the Rotary Club of Long Grove, Kildeer and Hawthorn Woods.

Hammerschlagen, “is more agility and hand-eye coordination than anything, I think,” Birch said.

About Rotary, “We’ve been trying to raise funds for different projects throughout the community as well as throughout the world, so Rotary does a lot of good things here locally, donating coats to the poor and providing meals for the needy during the holiday season,” Birch said.

Sampling the German dark ale that afternoon and dressed in festive German clothing were Alex and Sandi Bersin of Long Grove.

“It’s an almost gone beer,” Alex Bersin said, joking, as he held his near empty glass stein, now up for a refill. 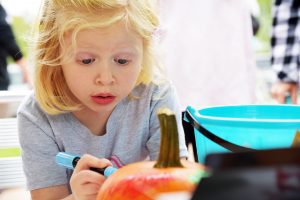 The two sang a traditional European song as they tapped steins at the tune’s conclusion.

“My children speak German and unfortunately, we don’t, and we enjoy the (Oktoberfest) celebration and we try to carry the tradition on,” Sandi Bersin said.

Painting a small pumpkin was Eloise Johnson, 4, of Barrington.

“We’re maximizing the fun while we’re out here at an Oktoberfest,” said Eloise’s uncle Jared Fedota of Hanover Park, who helped Eloise at the pumpkin activity table.

“It’s great, I enjoy your beers, congratulations to three years and keep it up,” David Johnson said.

“We’re excited,” Cupic said with a smile as her family waited for a turn on the tractor carriage ride.