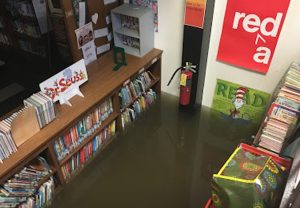 The Murphy Elementary School library on the lower level was flooded, during July 2017. (Photo courtesy of Phil Georgia)

Heavy rains have once again raised the specter of flooding in Lake and McHenry counties along the Des Plaines River and the Chain O’ Lakes-Fox River systems, although not approaching the record levels of the “100-Year Flood” in 2013, and its counterpart that inched higher four years later.

Federal funding was left lacking in the wake of other natural disasters that occurred in July 2017. It forced public entities to pay deductibles on insurance claims to cover damage, and raise premium fees, through an inability to meet an $18.3 million combined threshold for public entities in the disaster-designated Lake, McHenry, Cook, and Kane counties.

One of the primary faces of 2017 flood damage was the W.J. Murphy Elementary School in Round Lake Park. The facility suffered extensive damage to its lower levels with an inundation of four-foot high waters effectively knocking out four classrooms, the gymnasium that doubled as the cafeteria, its library, music room, and computer room. Remedial efforts are underway, but the process is time-consuming when the work is conducted around the school’s education programs.

Another factor was also the health concerns from mold, after the waters receded.

“There was mold detected after the water was pumped out and had receded, and the first order of business was to move in with machines that would blow hot, dry air,” said school principal Phil Georgia. “That lasted for a few weeks, and there were constant air quality checks to make sure the facility was OK for re-entry. 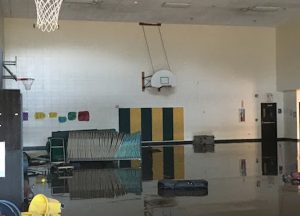 The school’s gym was also used for the lunch cafeteria. (Photo courtesy of Phil Georgia)

“To get underway, we used mobile classrooms for most of the year, and held physical education classes outside whenever possible. When there was inclement weather, the PE teachers would come up with creative ways to keep the students engaged,” he said. “The cafeteria situation meant we prepared the food off-site at the high school, and transported in.”

The repair project is two-fold with insurance claims covering the damage from water, and addressing a long-term issue with flooding at the school site, located at 220 Greenwood Drive. The Round Lake Area Schools, also known as Community Unit School District 116, endorsed a plan by its board to replace the drainage tiles in the elementary school’s lower level at a cost of $800,000 where the materials and placement will be completely redone.

“Another major task will be the installation of a life station for our building, which will take the water into the Round Lake Park effluent receptors,” said Georgia.

A municipal pump had failed during the July 2017 flood, and left much of the excess water staid and not forwarded to a retention pond, approximately 600 feet north of the facility. The lift station would act independently of municipally-owned equipment.

“The flooding of the school was a disaster and tragedy, but at the time, a $2 million figure was being floated around, as the damage estimate,” said Georgia. “In fact, there was no chance to come up with a proper assessment total … there was no exact number. What we faced was the resultant damage to the building and the creative ways that were employed to maintain our educational components.” 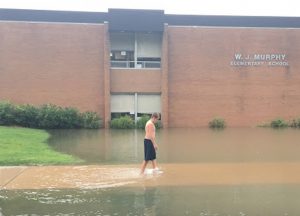 The exterior of Murphy elementary School during the July 2017 floods. (Photo courtesy of Phil Georgia)

The school district will benefit from state legislation enacted Aug. 29, and potentially reap $5 million that would pay for the remedial projects under the “Evidence-Based Model” for funding to public and private schools. House legislators tacked an amendment onto House Bill 1947, which encompasses individual school districts that are the least fully funded, its specific needs, along with local revenue arms, in appropriating state aid for its operations.

“The work will continue at the school, and most of it is scheduled to be done during the summer months,” said Georgia.

He also said all the repairs will be completed in time for the 2018-19 academic year.