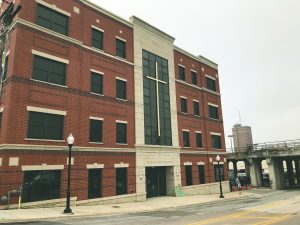 The city of Aurora has told 19 registered child sex offenders that they must vacate a downtown residential hallway house by late July.

The men, who reside at the Wayside Cross Ministries, 215 E. New York St., were served  notices last week, giving them 30 days to relocate under a state law prohibiting registered child sex offenders from living within 500 feet of a park, school or other location where children may gather.

“We received this news with shock and sadness, considering our over nine decades in the community, all of which has led to transformed lives,” said Executive Director James Lukose in a statement posted on the agency’s website.

“Our effort and priority is protection of our children, especially in proximity to the park where children regularly play,” Irvin said.

The notices came after the city assigned addresses to local parks and reworked property maps. Officials discovered in February that the Wayside Cross property line was now less than 500 feet from both nearby McCarty Park and a daycare center.

“That’s when we started having meetings with Wayside Ministry,” Irvin said. “Now that we have identified that the full park, not just the center of it, is the location that should be measured — from property line to property line — they were in violation.”

Until those changes, the distance was measured from the center of 100-year-old McCarty Park and left Wayside Cross outside the area where the state law would otherwise have applied.

On June 26, Aurora Police served notices to 20 persons,  including five Wayside Cross staffers who had completed a recovery program. One person served lives at another Aurora location.

It’s not certain where any of the men would move — whether in Aurora or outside the community.

“Wayside Cross Ministries has been the only refuge for these men, and has been a beacon of light for over 90 years,” Lukose said. “Releasing these 20 men into the community without supervision and support is not in the best interest of these residents or the community.”

Wayside Cross is also the current home to Thomas Kokoraleis, released from prison earlier this year after serving half of a term in connection with the 1982 murder of Lorraine Borowski. He was a member of the four-man Ripper Crew, suspected in the murders of 18 persons, including 17 women, from 1981-82.

The 59-year-old Kokoraleis was  not included in the eviction notifications.