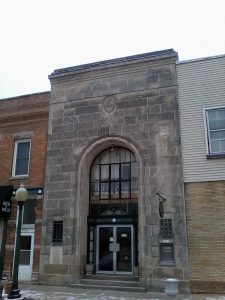 The State Bank of Richmond, built in 1890, marks the point where the great fire of Christmas Eve 1902 stopped and changed direction to head east toward other commercial and residential dwellings.

It is a tale that resurfaces annually at Christmastime, although not a traditional-type story in keeping with the season.

The Richmond residents that recall the event were told about it by their parents and grandparents. It exists as a Jan. 1, 1903 article, from the now-defunct Richmond Gazette, and revisited in 1981: Christmas Eve fire of 1902, which consumed the majority of, what is now, the historic downtown district.

In 1837, William A. McConnell erected a log cabin and became the first settler in what would later become Richmond. According to Gail Drabant’s “History of the Covell House,” most of the town’s original buildings were constructed between 1840-1860, a patchwork quilt of farmhouses, a school, several businesses, and main commercial district.

However, in viewing the tops of buildings in the historic downtown area along Route 12, bordered roughly by Mill and Broadway streets, the completion dates on the mantle plaques display dates after 1903, and into 1914. The residential architecture in proximity to Broadway Street’s east side reflected the era with “later prominent homes cast in the Italianate or Second Empire styles,” as noted by Drabant. 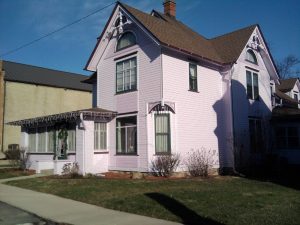 The Schroeder house was the scene of Ralph “Darb” Kilburn’s effort to save the structure, standing on the roof’s pinnacle, throwing water onto horse blankets.

She leaves a cryptic paragraph in the narrative, accounting for the building spurt between 1903 and 1905: “On Christmas Eve 1902, a devastating fire swept through most of Richmond’s commercial district destroying twenty buildings. The fire was a setback for Richmond’s economic growth as most of the buildings were either uninsured or underinsured. Many business owners did not bother to rebuild at all, following the fire.”

Kris Anderson, a long-time Richmond post office employee, said, “I remember hearing the stories of the fire, as a little girl … it destroyed the downtown area. I grew up in the old T.C. Schroeder house, the home on the south side of the Richmond Memorial Hall, and it was one of the few houses to survive. My mother told me the story of the fire.”

The effort involved with saving the Schroeder house was depicted as the “scene of a valiant and successful attempt by Ralph ‘Darb’ Kilburn to arrest a raging fire … Kilburn sat on the topmost pinnacle throwing buckets of water on horse blankets covering the roof until the blaze subsided.” The footnote explained that Kilburn’s clothing would ignite from the heat, and summarily extinguished by “dashes of icy water.”

On that evening, people living in the apartments near Main and Broadway streets were “aroused by the smell of burning wood. Upon investigation, fire was found to be raging in the rear of the building, occupied by A. Fisher, in a bakery-restaurant, and the partition between the kitchen and William Nyquist’s drug store.”

The structure was considered too far gone to save, while the city marshal was notified, and the city’s lone fire engine was brought into action. That fire engine is now on display at the Richmond Township Fire Protection District stationhouse, on Route 12 and Hunter Drive.

Fire consumed the jewelry store and meat market on either side, and worked its way to the Rice Bakery and Restaurant heading south. The Velsey Tailor Shop, adjoining the restaurant, was engulfed with flames as the blaze then wound south around the corner to a millinery shop. A bucket brigade chain-carried containers of water that were hand-thrown onto the fire. The conflagration halted at the walls of the old bank building on Broadway Street.

Unfortunately, the heat from the burning structures set other buildings into flame, on the east side of the street. The Nash Grocery Store, Wray’s Undertaking and Furniture Establishment, as well as the Gazette’s own printing and news offices went up, followed by Johnott’s Grocery in the former 1905 Emporium building. The city jail also burned to the ground.

The paper’s account continued, “Kilburn’s efforts to save the Schroeder house became a focal point, since it was presumed that had the walls started to burn, it could have taken the entire southeast portion of the town with it.” Kilburn was a “center of attraction” standing on the roof’s pinnacle. Many others joined in protecting the house, and quashing the flames.

It was determined that approximately $40,000 in damage had occurred, with many of the sites uninsured and leaving no funds for them to be rebuilt. No one was seriously hurt during the incident, and it was later determined and “considered that a defective flue in the restaurant” was the cause.

The basement of Memorial Hall, located at 10308 Main St., and built in 1907, became the host for the city’s jail, a “one-cell clanger,” and the village’s Police Department. The lower level also contained the village offices until the late 1980’s, when they were moved to the new municipal complex at 5600 Hunter Drive. The jail cell was also moved to the Hunter Drive facility, and its lineage from the manufacturer was dated to 1905, before records disappear.

The historic downtown business district, as it appears today, was shaped by the chaos and danger that took place on Christmas Eve 1902. The district also shows the resilience of the townspeople, not only in erecting new buildings but the self-sufficiency to carry forward … a happy ending to any story.