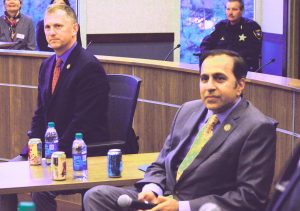 The system of checks and balances that our forefathers put in place has, sadly, become political, according to two Chicago area congressmen.

“We have reached a moment that to defend the Constitution and to argue for a strong United States Congress that actually stands up to the executive (branch) has become a partisan issue,” Casten said to a packed Carol Stream Village Hall board room. “That is the constitution crisis we are in, not Trump. Our founders contemplated someone like the president … That’s why we have these checks and balances. Our founders did not contemplate that it would be partisan to ask for a job of an organization and then not work to make that organization as strong as possible.”

Casten said the Democratic majority in the U.S. House is pushing for checks on the executive branch, but getting no support for such measures in the Senate.

“That’s not a bridge too far. That’s what the law says,” Casten said.

Krishnamoorthi said part of his job as a representative in Congress is “to serve as a check and balance on the president.” 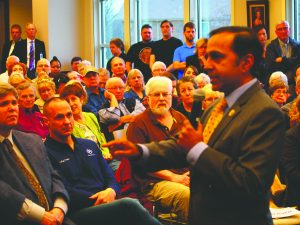 “I believe right now we are testing a very simple proposition, which is this: I believe that no man or woman is above the law, not even the president of the United States of America. Nobody, no one,” Krishamoorthi said. “We are all equal under the law. I don’t care if you’re a Democrat, Republican, independent. I don’t care if you’re a member of Congress, a senator or the president. That is what we have to do in the House and the Senate, which is make sure our laws are followed and that partisanship does not enter into a decision on whether or not those laws were violated.”

The Schaumburg Democrat, who sits on the House’s Intelligence Committee, said he hoped the report created by special counsel Robert Mueller can be used to ensure that the Russians or any other adversary are stopped from meddling in an American election ever again.

Krishnamoorthi said he is happy with the accomplishments of the Democrat-controlled House’s first 100 days. He pointed to the For the People Act, instituting ethics reforms in Congress and creating more transparency, and the reinstating of the Violence Against Women Act, ensuring support for domestic abuse shelters, as some early accomplishments.

He said he hopes to tackle the cost of four-year colleges with legislation later this session.

Casten said campaign finance reform is something that needs to be addressed.

“They talk about the last election being a Blue Wave,” Casten said. “Ninety percent of incumbents remained in office.”

He said he also wants to see fair congressional districts created where individuals from both major parties have a fighting chance of being elected.

Congressmen reflect on magnitude of job

More than 100 days into his work as a congressman, Sean Casten (D-6th) still marvels at the job he has been given. 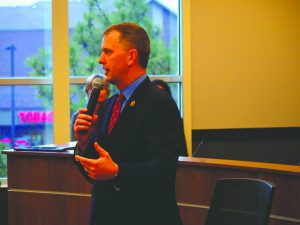 Congressman Casten said asking for a president’s tax returns is a right of the U.S. House’s Ways and Means Committee. (Photo by Kevin Beese/Chronicle Media)

“I pinch myself every day. I’m in this job where there are 11,000 people in human history who have had this job,” Casten said in a Chronicle interview following his April 16 town hall meeting in Carol Stream with fellow Democratic Congressman Raja Krishnamoorthi (D-8th). “If that doesn’t inspire you to go to work in the Capitol dome every day, you’re kind of missing it. It’s a long way to second best after that.”

The congressional freshman said it has been tough to get acclimated to the deliberative pace of government.

“It’s not clear to me, at least based on my first 100 days, that the body is really set up to move with the kind of expedience that we have to for climate change, for undoing the deficit challenges of the last tax bill,” Casten said. “I hope I’m wrong about that, but it’s frustrating to realize how slow it is to get the ship steered in the right direction when you know exactly where you have to go.”

He said the Democrat-led House has taken many steps to right the ship, but Senate Majority Leader Mitch McConnell (R-Kentucky) has failed to take up those same issues in the other congressional body.

“We are one branch. We have passed a lot of stuff. It’s not been all straight party-line votes. We voted 420 to nothing to release the Mueller report, and they blocked it from coming up in the Senate,” Casten said. “I don’t apologize for that. I’m proud of the fact we did our job. I’m really angry that the Senate is not doing its job. I don’t think that’s a partisan issue. We have people who are committed to good government. We have people who are committed to representing the interests of the people and it’s become a partisan issue to say that.”

Krishnamoorthi, now in his second term, said having some tenure in Congress and his party in charge of the House has its benefits.

“I actually get to be the chairman of a subcommittee on economic and consumer policy as part of (the) Oversight (Committee) and so we have launched investigations into some really serious issues, including asbestos-contaminated talcum powder as well as how do we protect data security at consumer credit agencies like Equifax and other places,” Krishnamoorthi told the Chronicle. “So we get to try to deliver on pocketbook priorities for the American people and also serve as a check and balance on the executive branch and President Trump. “

The congressman, who immigrated to this country as a young child, said it is deeply disturbing the way immigrants are being treated today in America.

“We are losing ourselves and losing our values, losing our way when we treat people on the border who are fleeing persecution and oftentimes horrible violence, the way we are treating them,” Krishnamoorthi said. “We go through these periods in our history where we seem to forget who we are as though we own the place and nobody else had lived here before we got here. We’ve just got to remember what makes America special, which is our welcoming attitude toward immigrants and the waves that have made our country better and better.”