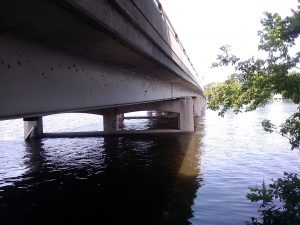 Flood waters on the Fox River in July 2017 inundate the support caissons at the Johnsburg Bridge. (Photo by Gregory Harutunian/for Chronicle Media)

Repairs to the aged sluice gates of the William G. Stratton Lock and Dam, located on the Fox River in McHenry, is expected to get underway in late October and completed by the same contracting company that oversaw renovations to its lock system, from 2014-16.

The Chicago-based firm of Kiewit Construction is currently in negotiations with the Illinois Department of Natural Resources over cost factors pertaining to the project.

The proposed action comes in the wake of a homeowner petition drive seeking better management by dam operators regarding the potential of damaging floodwaters not being addressed in a timely manner. The U.S. Army Corps of Engineers was being asked to intervene with the state, as a means of controlling high water and prevent inundation, similar to the most recent “100-Year floods” of 2013 and 2017.

“I think I’ve said this before … no one could have predicted those rainfalls and the amounts that were deposited in the Chain O’ Lakes-Fox Waterway system,” said Joe Keller, the Fox Waterway Agency’s director. “It’s also a rock and a hard place situation. If too much water is let out, and no rain event comes, boating and recreation suffers.”

“There have been discussions underway to complete the rehabilitation and replace the gates on the dam,” he said. “Some of the gates are in such dire need of repair that for them to not function properly comes as no surprise to anyone. IDNR said they wanted to re-engage Kiewit, after the success of the locks as soon as late October and the negotiations are still ongoing.”

Property owners along the river and waterway have expressed concerns with the perceived lack of attention to weather forecasting and prediction models for stormwater. They were advised by the Army Corps to first seek resolution at the local level, prior to escalation to the federal level.

The mid-July 2017 floods brought a 17.4-foot crest at the New Munster, Wis. gages, a two-foot increase over the 2013 levels. Fox Lake and the Stratton Dam also recorded increased levels over the 2013 benchmarks. Algonquin experienced severe flooding at its riverbanks and some subdivisions last summer and forced the cancellation of its “Founder’s Days” festival, a yearly downtown event and summer staple held consecutively since 1961.

The system’s flow pattern has origins in Wisconsin, going through Burlington, New Munster, and Wilmot before entering the Chain O’ Lakes region and the Illinois tributary path of the Fox River through McHenry, Algonquin, and before emptying into the Illinois River, and eventually, the Mississippi River.

“The lock and dam is run by IDNR and officials do monitor weather forecasts and make adjustments,” said Keller. “When the gates are wide open, care has to be taken not to flood the lower Fox River. I spoke with one of the property owners, and everybody believes that more care and support should be done for the system.”

The 2014-15 lock improvements were the first renovations undertaken since the 1960s, with a targeted five-part program aimed at upgrading the structures. The Stratton and Algonquin dams were constructed specifically to maintain water pools sufficient for recreation on the river and the Chain O’ Lakes area.

The Stratton Dam improvements encompassed the replacement of sluice gates for the dam, with torque tube gates designed to manage the water flow during normal levels. There is inadequate storage for water, during flood events, and the gates are then used to minimize the water damage throughout the region. The Algonquin Dam’s control effort included remote monitoring and operation sharing information with IDNR-Springfield for “no wake” notices and river closures.

“The dam rehabilitation is timely, and it’s also a balancing act,” said Keller. “You have to weigh the cost benefit with the gates contributing to erosion on shore when open, and shoreline protection … and finding a way to navigate it.”