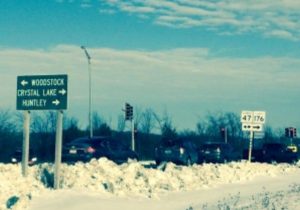 The northern intersection at routes 176 and 47, seen last winter, where an IDOT resurfacing project is taking place. (Photo by Gregory Harutunian/for Chronicle Media)

An Illinois Department of Transportation resurfacing project inadvertently contributed to numerous traffic accidents and a truck rollover that occurred Aug. 16 and Aug. 21, along Route 176 and its northern intersection with Route 47.

A primer liquid placed on the road, ahead of the actual resurfacing, resulted in a wet top and a loss of traction after several rainstorms dotted the area.

Vehicles attempting to stop at the traffic signal instead found themselves in an uncontrollable slide. More than one dozen vehicles were pulled onto the shoulder, and on the adjacent frontage of Pleasant Valley Road, along with a jackknifed truck had rolled into a culvert Aug. 16. The Lakewood Police Department and the McHenry County Sheriff’s Department responded to the service calls. Emergency Medical Technicians also transported some individuals to a nearby hospital via ambulance.

“There was a type of oil on the surface of the roadway, they were in the process of paving, and with the rain, it was not a good mix,” said Lakewood Police Chief Mike Roth. “We received calls about 6:39 p.m., and responded to about three accidents. People were trying to apply their brakes and there was no traction. There was a jackknifed truck, outside of our jurisdiction, in the county area, there was a passenger car rollover … however, there were no significant injuries.

“We had it happen again, a few days later, on Aug. 21, where there were three accidents in a row,” he said. “Our village administrator (Jeannine Smith) met with IDOT officials Aug. 23, and the situation was corrected.”

The resurfacing project encompasses Route 176, from terminus points at Route 23 in Marengo to Route 47, and began in July.

IDOT District 1 Communications Officer Guy Tridgell said, “What happened (Aug. 16-21) was a step, just prior to resurfacing. The material, a primer, became slick during the rain. There were also some additional signs that we placed in the area, when this occurred. Also, on some of the more traveled areas, there was sand placed on the surface. Going forward, we’re planning to sand all the intersection just to provide more traction, just in case.

The firm of Peter Baker and Son was named contractor for the project, out of the job-letting bid process, awarded the job order on a bid of $2.4 million.

The primer coat applied to the roadway normally takes up to four hours to cure and settle, based on humidity and weather conditions.

“We think that whatever issues were experienced should be mitigated now that they’ve begun placing the final surface material and paving until the project is complete,” said Tridgell. “As mentioned … there was a primer placed on the road surface in anticipation of the resurfacing beginning shortly, based on expected weather conditions at the time. When the department became aware of the slick conditions, additional signs were put in place and sand was applied to improve traction.

“Based on feedback received from local law enforcement, excessive speeds contributed to some of the incidents,” he said. “We would like to remind the public to be especially careful traveling near, and through, work zones. Equipment can be present and conditions can change, requiring slower speeds and the full attention of drivers. The intersection is being paved beginning Aug. 23, with a new surface.”

A section on the IDOT website offers instructions on the claims process:  http://www.idot.illinois.gov/travel-information/report-a-problem/claims/index

IDOT District 1 Construction Manager John Schumacher had no comment on the issue, at this time. The McHenry County Sheriff’s Department communications officer was also not available for comment.